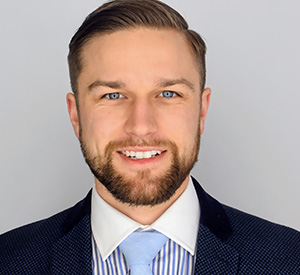 Evan Peters has been busy since completing his BA at St. Thomas. After graduating in 2012, the economics major has held several jobs, gotten married and made a rapid climb up the corporate ladder – all while pursuing his MBA at Saint Mary’s University. Most recently Peters was promoted to Director of Information Technology for the Saint John Transportation group of companies at JD Irving Ltd.

Peters says his time at St. Thomas gave him some of the tools with which he built his career.

“STU allowed me to be both an academic and an athlete, which taught be a great deal about time-management and balance – two key components of professional success. The foundational skills I acquired throughout my education in conjunction with hard work and persistence produced the perfect storm.”

Peters’ also attributes his success to a large dose of good timing.

“I was fortunate enough to start my career at Irving Shipyard in Halifax Nova Scotia shortly following Irving Shipbuilding having secured the title of prime contractor for the Arctic Offshore Patrols ships as part of Canada's National Shipbuilding Strategy. This velocity of change and evolution of the Shipyard allowed me to take on increasingly challenging and rewarding tasks.”

Peters is thankful for the support he has received from those around him.

“I have been lucky enough to have a strong support network both at work and home,” he said. “And I have and will always acknowledge the integral role that [my] mentors played in guiding my development.”