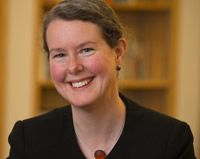 Julia Torrie is a Professor of History at St. Thomas University. Trained as a German historian, she has broad interests in modern European and World History. She is curious about questions of equality and inequality, resource access, and the interplay of powerful and less powerful actors within constraining structures like authoritarian regimes and empires. Her comparative and World History courses focus on themes like social policy and food.

Torrie has published two books and a co-edited volume on Germany, France and Europe in the Second World War, as well as articles and book chapters on themes ranging from tourism to visual and food history. Her book, German Solders and the Occupation of France, 1940-1944 (Cambridge University Press, 2018) explores the contradiction between the inherent violence of a military occupation and German occupiers’ construction of it in diaries, letters, and photographs as pleasurable. Previously, For Their Own Good: Civilian Evacuations in Germany and France, 1939-1945 (Berghahn, 2010), used air-raid induced evacuations to explore questions of consent, wartime social policy and popular protest. She has been a Fellow of the Institute for Advanced Studies, Nantes, and of the Alexander von Humboldt Foundation, and her research has been funded notably by the German Academic Exchange Service (DAAD) and the Social Sciences and Humanities Research Council of Canada. Her two current research projects address on the one hand, German women’s war experiences during the Second World War, and on the other hand, the history of food and empire.