Education that’s “Second to None” 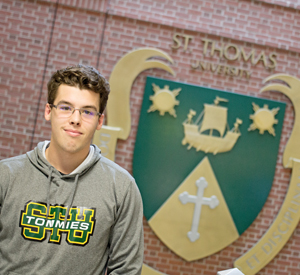 Derek Bailey has found his niche at St. Thomas University.

The third-year Psychology student from Oromocto, NB, has discovered a welcoming and supportive community, has built a network of friends with similar interests, and has developed relationships with professors that allow him to engage with academic community.

Bailey calls his time at STU “an all-around rewarding experience,” and it’s one that’s been influenced strongly by his President’s Scholarship.

“It’s a load off my shoulders,” he said. “I knew if I was going to go to university I would have to take out student loans. When St. Thomas came to my school and gave me the scholarship it was a surreal moment.”

Bailey has made the most of his opportunities at St. Thomas. He’s been a member of the Tommies men’s rugby team for the last three years and is a peer tutor in Psychology.  Outside of the university, Bailey acts as a middle school rugby coach each spring.

“It’s difficult at times,” Bailey said of balancing his course work with his involvement in the community, “but it’s rewarding knowing you put your focus on school and you see the results at the end of each semester.”

Bailey didn’t come to St. Thomas intending to study Psychology, but has discovered a deep interest in the field. With the variety of courses offered, coupled with the approachability of professors, he said the quality of the education he’s receiving is “second to none.”

“STU has a wide variety of faculty that covers a lot of different areas, which is nice. The range of the Psychology faculty and their expertise is amazing,” he said. “It’s awesome to have the opportunity to look into different fields of Psychology and be able to explore what you’re interested in.”

His long-term interests involve research into concussions and their effect on behaviour, but for now Bailey’s focusing on applying to the honours program in Psychology with the ultimate goal of earning a master’s, a PhD,  and teaching at a university.

Scholarships and Bursaries at St. Thomas