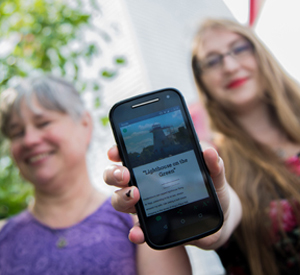 Katlin Copeland, BA’ 17, is hoping her Poetic Places Fredericton app will provide a unique outlet for experiencing poetry in the city.

The Fredericton version of the app—inspired by the original Poetic Places that was created in London at the British Library—is the first of its kind in North America.

“The app might target a different audience than the people who are already interested in buying poetry or going to the library and picking it up themselves,” Copeland said. “It’s just a different way of getting Fredericton poetry out there.”

Copeland, who completed an honors in History and a double major in English and Great Ideas, worked with Dr. Kathleen McConnell, of the Department of English Language and Literature, to produce the Fredericton application.

“You download the app and when you walk around downtown Fredericton your phone will send you a push notification and say that you’re near a poem,” Copeland explained. “When you open the app, you’ll see the poem, a bibliography of the author, and a little bit of information about the place we’ve set the poem.”

The locations included in the app have either inspired poems directly or were of importance to the poet.

“I think it’s neat,” McConnell said of the app. “People who aren’t poets or aren’t involved in the literary world can suddenly say ‘hey, someone wrote a poem about this place.’”

To date, there’s 18 authors featured in Poetic Places Fredericton, many of whom have connections to the STU community, including Frederick Mundle, Lynn Davies, Raymond Fraser, and Sheree Fitch.

The app will operate on the web and Android devices initially with the hope of extending to Apple products in the future.

Following the official launch of Poetic Places Fredericton, Copeland will begin her studies in the STU School of Education.