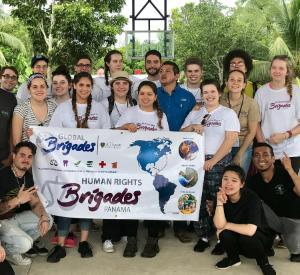 Travelling to Panama as a member of STU Global Brigades was an experience that challenged Angela Bosse intellectually and personally.

“I learned so much from Global Brigades before I even boarded the plane to Panama. We prepared for months, reading documents, learning Spanish, trying to challenge our perspectives and assumptions,” Bosse said.

“I still knew nothing when I landed. No matter how much you prepare, the vast majority of your work is going to be from what you learn on the ground once you arrive.”

Engaging with the Community

Adjusting to life in Panama presented its challenges—a last-minute case change, power outages, intense heat and humidity—but the work accomplished by the group was worth it.

“What was so encouraging about this experience was the engagement we received from the community members. Our legal clinics were full of people coming to ask questions and learn how to solve problems,” Bosse said.

“In our adult workshop, there was an amazing discussion about gender roles and how to go about changing them. It was so empowering to see women engage in conversation about how they assert their independence.”

Despite the cultural differences, Bosse was struck by how the lives of those she was working with reflected her own.

“The biggest difference is that the simplest things we take for granted, like getting a marriage license, are inaccessible,” she said. “When you enter a different culture, your assumptions will be challenged and what’s interesting is how your expectations reveal those assumptions.”

An Opportunity for Growth

One of the most memorable moments for Bosse was visiting the home of one of the women who leads the local community bank.

“The floors were dirt, there were cracks and holes in the wall, and the wires for the few bare light bulbs were exposed along the ceiling. Everything was open to the outdoors. Chickens ran around freely, but it was tidy. You could tell the house well cared for and kept with pride,” she said.

“This woman was generously opening her home to me. I felt such gratitude for what she was doing for us and what I had seen all through the week was reaffirmed—the kindest and most generous people are often those who have the least.”

Looking back, Bosse feels privileged to have been a part of this experience.

“I’m so grateful to have had this opportunity to grow, learn, and challenge myself,” she said. “The bonds forged in that week will last a lifetime. I feel blessed to have been a part of it.”

Global Brigades is an international, non-profit organization and the largest student-led social responsibility movement in the world. The STU chapter of the group is the result of the efforts of the group’s president, Jimy Beltran, and the university’s Manager of the Office of Experiential Learning and Community Based Learning, Jessica Hughes.

The group from STU was joined in Panama by two students from Penn State—Sophie Haiman and Emily Lee.