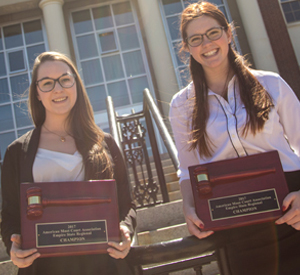 The STU Moot Court team returned from a regional competition in Albany, NY with multiple speaker awards, the competition’s first place title, and at least two bids to the National Moot Court Competition in Dallas, Texas in January 2018.

Husoni Raymond, first-time mooter and second-year student, and Emily Williams, second-time mooter and third-year student, also brought home orator awards—seventh and eighth place, respectively. Williams and her partner, Camille Xavier, landed in the top four and are guaranteed a bid to nationals, while Raymond and his partner, Adriel Miller, placed fifth and may attend nationals, depending on the results of remaining regional competitions throughout the United States.

Workman, who studies Communications and Public Policy and Political Science, said her partner’s previous experience at nationals was a motivating factor for her. Walsh earned a bid to nationals in 2016.

“She’s so good, and I wanted to get to where she was,” Workman said. “We established expectations of one another, talked about how we were going to present and decided what our goals were. We said we’d aim to qualify for nationals and have some fun, and that’s what we did.” “Once we got into rounds,” she added, “I realized just how prepared we were.”

Walsh, who studies Human Rights and Political Science, said she was grateful for her partner.

“We had a crazy chemistry as a team,” she said. “Our first day in Albany went super well. We took all six ballots.”

In addition to coming first overall and earning the top speaker, Walsh had a more personal victory in Albany. Her direct opposite in the final round—which she and Workman went on to win—happened to be the first moot court opponent she ever faced.

“In my first competition ever, he just smashed me,” she recalled. “He was so good. That was just one year ago. To come to a point where I was beating him on the ballot this year was such a personal accomplishment for me.”

For the first time at a regional event, all STU teams placed in the top 16. This means every STU mooter came home with an award.

Raymond, who studies Criminology and Political Science, said he was surprised and elated upon being named a top orator at his very first competition.

“I didn’t expect it because there were a lot of excellent speakers,” he said. “The competition exceeded my expectations and confirmed I’m on the right path to my goal of being a lawyer.”

For Williams, who studies Criminology and Human Rights, being a second-time mooter had its benefits. It was also her second year matched with Xavier.

“We knew what to expect. We knew the judges would ask questions and we would rarely get through arguments before being interrupted. We were prepared.”

Xavier, who studies Human Rights and French, said her and Williams had agreed on a goal of earning a bid this year.

“It is amazing, rewarding, and humbling to have a bid to nationals,” she said. “We have put in many hours of work, and to see it pay off is surreal. It’s a culmination of teamwork and mutual support among the whole group.”

The success of the STU Moot Court team has garnered public attention. In October, Frank and Julie McKenna announced a personal donation of $300,000 to the program.

Walsh said the support has meant a lot to the students.

“I said, ‘He believes in us, so now we have to go win it,’” she said of McKenna. “What a kind act, and to do it in the name of his long-time assistant, Ruth McCrea, who he described her as a feisty redhead—I was like, ‘We’re feisty redheads! That’s truly the spirit of Moot Court.’”

“To have someone who has had so much success in his life shake your hand and tell you he believes in you, made me feel such gratitude and inspiration. There were people rooting for us and hopefully they’re pleased to know we were able to accomplish this.”

More STU teams will compete for bids to nationals before the official list of nationals-bound mooters is announced in December.