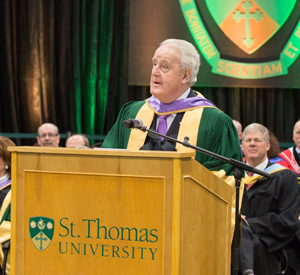 It was during his time as a student at St. Thomas College that the Rt. Hon. Brian Mulroney learned about tenacity.

Mulroney, who was Canada’s 18th prime minister, told the class of 2018 that whenever he faced challenges and obstacles throughout his life, he would remember his time at St. Thomas.

“I learned at St. Thomas that failure was not an option,” he said. “Life is a mix of challenges from which no one emerges unscathed. Defeat is not something to fear, but surrender is something to reject. Never has it ever occurred to me to quit at any time in my life.”

Mulroney and his wife Mila Mulroney received honorary doctorates at Spring Convocation, where he spoke to the 300 graduates who received degrees in applied arts, arts and social work.

“When I left college, as you are about to do, to head to the big city to conquer the world, or so we hoped, I had no money, no connections and no influence. But I had two things: a college degree and the values that had been implanted into us by superb faculty and university leaders. And as I look at you today, I can tell that at St. Thomas University, you have had the best,” he said.

“As I look at this impressive graduating class, I see hope for the future in this explosive and dangerous world. I also see inspiration. The torch truly has been passed. You have been blessed with a degree from this great university and you are our new generation of leaders.”

Class valedictorian Andrea Lopez, who is from El Salvador, also had a message of hope for her classmates. She told her fellow graduates that STU prepared them well for their next challenges and that they were now ready to lead.

“STU has provided us with opportunities that we could never have imagined.  Opportunities that have opened new doors for our future,” Lopez said. “STU has taught us that in life you need to have courage to speak your mind and to ask questions. That by acquiring a liberal arts degree your possibilities can be endless. STU has given us the tools to build a better future for ourselves and the world, and now we must do the job!”

“Brian Mulroney has a noteworthy record of economic, environmental, and international accomplishments, while Mrs. Mulroney played an important role during her husband’s time in office and has been a prominent and effective leader of charitable causes for over three decades,” said Dawn Russell, St. Thomas University’s president and vice-chancellor.

Brian Mulroney practiced law in Montreal and was president of the Iron Ore Company of Canada before becoming leader of the Progressive Conservative Party. In 1984, he led the Conservatives to the largest election victory in Canadian history and was re-elected with a majority government four years later becoming the first prime minister in 35 years to win successive majority governments. His government introduced the Canada-U.S. Free Trade Agreement, the North American Free Trade Agreement, and the Canada-U.S. Acid Rain Treaty.

Mila Mulroney attended to a full agenda of official functions in Canada and abroad during the years of her husband’s government. She also represented Canada at international forums and played a leadership role in many charitable and educational endeavours. She served as National Chair of the Cystic Fibrosis Foundation of Canada for almost a decade, raising millions of dollars for research into this genetic killer of children while spending countless hours visiting, encouraging, and consoling the victims and their parents. Mrs. Mulroney has also focused on literacy projects, particularly with Frontier College. She was co-chair of Table of Hope for fifteen years, a leading Montreal charity that provides meals to schools in less affluent neighbourhoods.