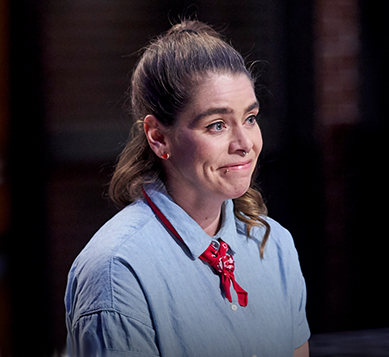 Crawford and other top amateur chefs from around the country competed on the weekly television series. In each episode, the contestants competed in challenges where one or more cooks were eliminated, until only one remained. Crawford was crowned the champion and earned the title of MasterChef Canada.

For them, one of the most unbelievable parts of the experience has been the amount of support they received during the competition—not just from family and friends but from fellow contestants as well.

Crawford said the contestants were brought together by a shared love of cooking and the pressures of performing for an audience.

“Imagine the undeniable feelings and camaraderie forged through food, then amplify it with the vulnerability of giving it your all in front of a national audience,” they said.

Crawford said there was another reason to push their opponents on—competition is more satisfying when everyone performs their best.

“There's zero joy in winning because the person next to you had a bad day. It's in everyone's best interest to root for the whole squad, hope you all have good days, and let the chips fall where they may.”

Aside from the other contestants, support has been pouring in for Crawford on social media. Some of the most touching words of support have come from viewers celebrating the success of a contestant that is non-binary and how their expression of their gender identity has inspired them.

“I'm a they/them/their, gender creative human,” they said. “I think I'm the first out queer person to make it this far on MasterChef Canada. It wasn't always easy being a gender creative on national TV, but if you could see my inbox of super touching messages, you'd know it was incredibly worth it.”

Cooking has been a passion for Crawford as long as they can remember—they are the only nine-year-old they know of that was obsessed with perfecting lattice pie crusts. But they had to put their passion on hold in recent years due to a long struggle with mental health.

“I'd gone through a few hard years with a debilitating case of PTSD. When things were at their worst for me, it was simply impossible for me to even do things like take transit, because it felt too vulnerable and scary.”

As they went through their healing process, they found they had a creative build up just waiting to be released.

“My creativity and imagination grew back with a force that surprised even me,” they said. “There were years of things in the hopper that I'd been too weary to make but now finally had the enthusiasm to do so! No matter where you're at and what you're aiming for, any day is a day when healing can begin.”