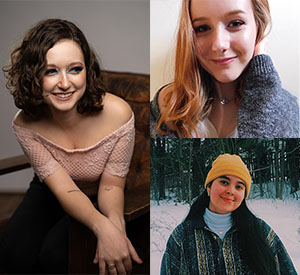 Delaney Crawford, Emma Rhodes, and Sara Lamk are this year’s recipients of the St. Thomas University Creative Writing Prizes. Lamk received the David Adams Richards Prize for Prose, Crawford won the Velensky Prize for Work in any Genre, and Rhodes was awarded the Casto Poetry Prize.

Delaney Crawford — The Velensky Prize for Work in any Genre

The Velensky Prize awards an overall entry which includes exemplary writing in poetry and prose. Crawford, the fourth-year English Language and Literature and Communications and Public Policy STUdent, said STU’s emphasis on reading widely further exposed her to novels, plays, poems, and short stories; and pushed her to think critically about her own work and that of others.

“STU’s English program is absolutely amazing,” she said. “For creative writing classes, you're placed in workshopping groups with peers where you get to explore dozens of students' stories and have your own story explored, too. These classes have been an essential step in levelling up my writing.”

The poetry adjudicator stated that Crawford’s “I promise to take more photos,” “is a pensive tender poem about the relationship between an adult child and their mother. It’s sweet, but also very realistic. A snapshot of a moment in poetic form, this poem is timeless, embodying thoughtful and sentimental elements of what can only be expressed through poetry. Beautiful.”

The prose adjudicator notes that “in Crawford’s story "Daisy Loves Dale" the author has created to great effect a harrowing scene in which a domineering father inflicts his will on his sensitive son, forcing the boy to shoot a beloved heifer in a barn. The scene depends for its success not only on the taut interaction between the two principal characters but also on the details of setting that enhance the horror: the cage around the doomed cow's head, the barn's humming overhead lights, the murderous, squealing hog a few stalls away.”

Two poems by Rhodes were recognized in the Casto Prize this year. The 2020 graduate earned an honours in English Language and Literature with a concentration in creative writing, and a major in Great Books. Deferring graduate studies during the COVID-19 pandemic, Rhodes has published her poetry and launched her own business.

“This year off school gave me a lot of time to just think,” Rhodes said . “One thing I spent time on was trying to define my queerness.”

“’My Queer’ is a collection of experiences and my feelings about them. It’s an exploratory poem trying to find what my queer is, and it ultimately doesn’t come up with an answer. It will take more time for me to settle on my identity. Currently, my queer simply wants to talk.”

The poetry adjudicator lauded Rhodes’ poem “My Queer” for “its strength, resilience, and queering of poetry,” and Rhodes’ second piece “When Was the Last Time I Thanked My Mother,” for its “challenging content and prose-like poetics.”

Awarded for creative nonfiction, "What Canada has Gifted Me for Free" by Sara Lamk—a third-year STUdent majoring in Human Rights and English Language and Literature with a concentration in Creative Writing—wins the Richards Prize for Prose.

The prose adjudicator observed: “Citing incidents of othering and blatant racism, the writer of this non-fiction sketch dramatizes what it is like being a Latina in twenty-first century Canada, a country that is considered by most to be racially tolerant. The anecdotes are blunt and revealing, especially of microaggressions. Structurally, the sketch is original (a string of anecdotes exploring a theme), but the piece also has the cumulative appeal of a narrative.”

“This piece is the compilation of multiple experiences I have had in Canada that were nagging at me to be told,” Lamk said.

Lamk said the prose courses at STU encourages students to dig deeply into their own experiences for inspiration.

“This piece of writing is very vulnerable and raw; it’sone that I was so nervous about its reception,” notes Lamk. “Winning this award felt like I was understood and seen and helps me see a clear future in writing.”

The English Language and Literature department thanks all entrants, and congratulates Delaney Crawford, Emma Rhodes, and Sara Lamk.