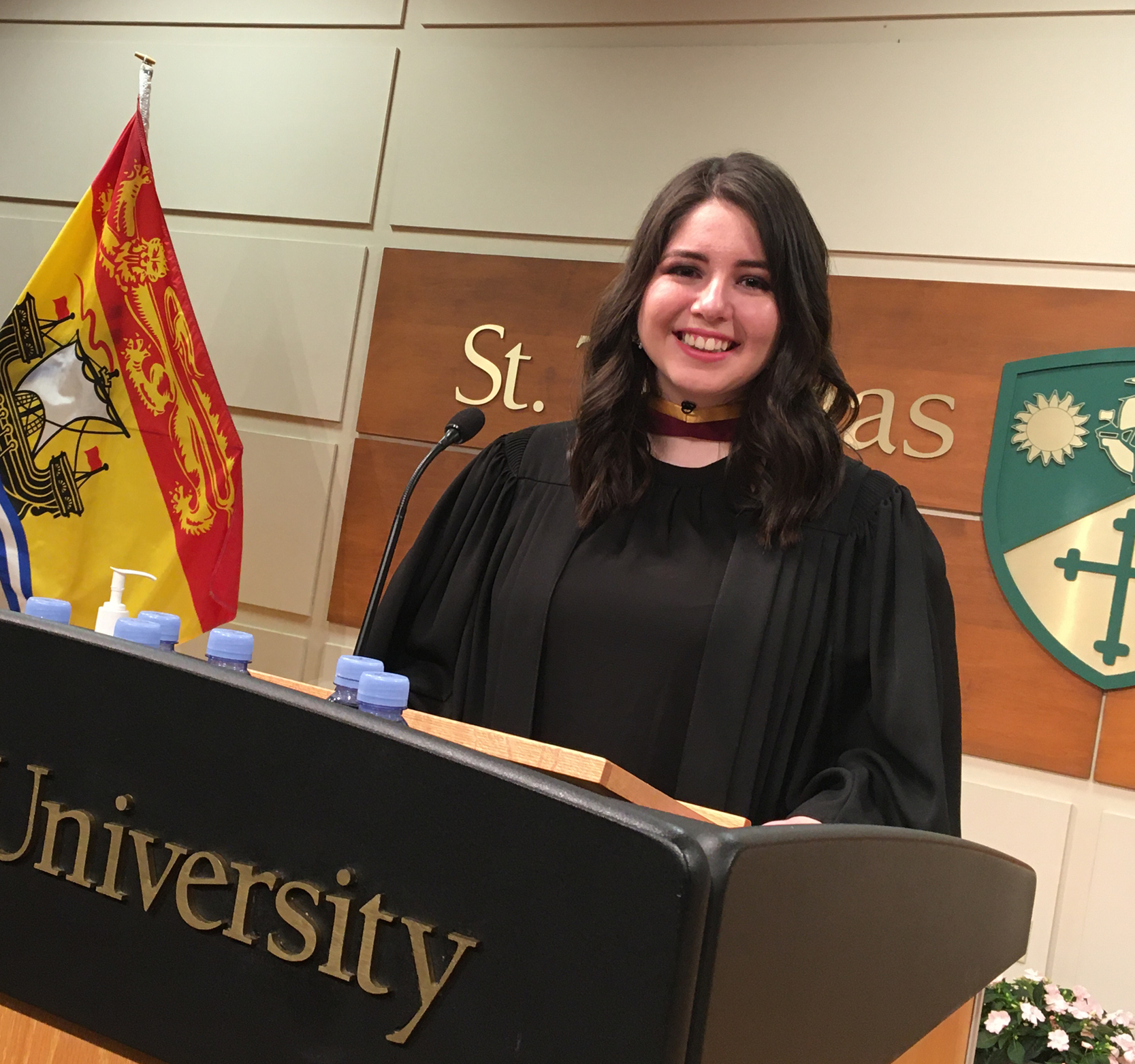 This was the message valedictorian Diana Chavez delivered as she spoke virtually to the more than 300 graduates who were receiving a Bachelor Arts, Bachelor of Applied Arts, and Certificates of Native Language Immersion Teaching at the virtual 2021 Spring Convocation.

Chavez, who is from Quito, Ecuador, told her classmates that two weeks into her first year, she already understood what community meant at STU.

She had just lost a dear friend in Ecuador, but the STU community embraced her and supported her through her loss in ways she could have never imagined.

And that community has continued to support her throughout her four years at STU.

“This past year was one of many firsts—online classes, a campus body scattered all over the world, and the uncertainty of not knowing when we would see each other again. COVID-19 changed what we envisioned our graduating year would be and turned it into a rollercoaster of emotions,” she said.

“But let me ask you a question: without the buildings, the classrooms, and the events, everything that makes STU the small and special community it is, what is left of it? The answer is simple. The thing that can never be taken away from us is our tight-knit community.”

The STU community is resilient and unique, she continued. And despite not all being together on campus, she said professors, staff and students looked out for each other more than ever.

Convocation was livestreamed and is available to watch in full on STU's YouTube channel. It included traditional elements of an in-person Convocation, including remarks from the president, address to the graduates, and valedictory. The university also formally installed its new Chancellor, the Hon. Graydon Nicholas.

The former Lieutenant Governor of New Brunswick, Nicholas has also been a lawyer, activist, and jurist. He has taught in the Department of Native Studies at STU and is currently its Endowed Chair in Native Studies.

“As Chancellor, Graydon will bring unique knowledge and perspective from his experiences in law, social work, Indigenous rights and political development, human rights, and public service. His life and work have been about hope, education, and the possibility for a more tolerant and understanding society.  We are pleased that he will continue that work at STU,” said Dawn Russell, President and Vice-Chancellor.

“This honour is as much a tribute to my parents, family, my wife, Beth, and our sons Michael and Brian,” Nicholas said. “I look forward to my involvement into the further growth of our university.”

Thurston has written more than two dozen books of poetry and non-fiction and has contributed to numerous magazines including National Geographic, Audubon, Equinox, Harrowsmith, and Canadian Geographic. His articles have received many national awards, including the National Magazine Award for Science and Technology and the Canadian Science Writers’ Association Science and Society Awards. For increasing public awareness on environmental issues, he received the Visionary Award of the Gulf of Maine Council on the Marine Environment. His books of poetry and non-fiction have also been honoured; he is a four-time winner of the Evelyn Richardson Prize for the best non-fiction book by a Nova Scotian and was honoured with the Dartmouth Book Award, Atlantic Booksellers’ Choice Award, Sigurd F. Olson Nature Writing Award in the United States, and the Lane Anderson Award for Best Science Writing in Canada.


St. Thomas University honoured four faculty members for their professional achievement and impact on the university.