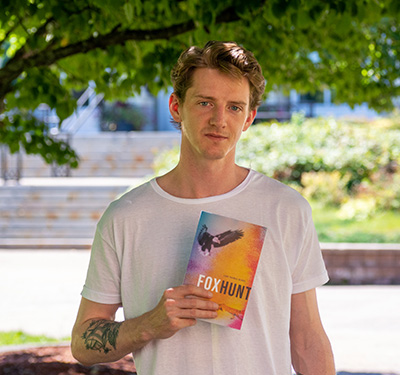 The novel tells the story of a Canadian writer who travels to London to start a literary magazine at the start of the Cold War.

After graduating from STU, Beirne completed a masters in cultural studies and critical theory at McMaster University.

“I researched literary propaganda of the Cold War at STU and McMaster. This research became the frame for the novel,” Beirne said.

Despite the Cold-War setting, Beirne said he doesn’t consider his novel a thriller.

“It’s slower paced and the spy story primarily plays out peripherally. I like to think that the writing itself drives the book.”

Beirne said the writing and rewriting process was hard work, but a lot of fun. He said seeing his first book published so early on was an incredible experience.

“Everything has to line up just right for a book to make it out of the gate and, fortunately, things lined up for me sooner rather than later.”

At STU, Beirne majored in English Language and Literature and minored in History. He said he came to STU with a love of reading, but only really learned “how' to read” when he got to STU.

“I learned about the way that literature 'works' and about how active the reading process really is. This has been very important for my development as a writer so far.”

Beirne said many of his professors at STU had a profound impact on his development as a reader and writer, including Professor John Muise from the department of English Language and Literature.

"His unashamedly human approach to literature and academia taught me so much," he said.

“When looking at literature from different angles, it becomes clear that so many of the ‘rules’ in creative writing are simply a matter of convention,” he said.

“When you read different kinds of writing, from different times and places, you realize that these value judgements have not always been consistent and are not apolitical. It's important to know that you can choose to emphasize different things and produce an equally valuable work.”

Beirne currently lives in Saint John, and is in the process of writing another novel.