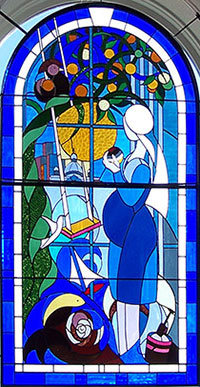 The theme of this stained glass window is a meditative and reflective exploration of feminine characteristics, combining the worlds of myth and a contemporary Christian contemplation of Mary.

The Mary of this window is a young pregnant woman, a solid fertility symbol reminiscent of the earliest artifacts of Minoan times and of African carvings, which unites her with nature, fecundity, and creativity. Expectant, waiting, she holds the ball of the world in her hand, a world of red, brown, black, yellow, and white races.

She is standing inside a room, which is by the edge of the sea, where life began and from which emerged Aphrodite, the ancient goddess of love and beauty. Mary is looking out through a window upon the world, a world which is a garden, a city, and a seaside playground.

What we see through the eyes of Mary are the symbols of an inner reality.

In the playground of this world is a dual tree. It is the tree of knowledge around which twists the serpent tempter, and the serpent healer. It is also the tree of life whose fruit gives ‘everlasting life’ and ‘whose leaves are for the healing of the nations’. On its branch sits a cockerel, a reminder of Peter’s and our denial.

In her humanity, Mary chose to listen to the word of God. As a child by the seashore, picks up a shell and listens to the sound, so the shell at her feet represents curiosity, inquiry and interior listening. A child’s pail and shovel play with the sands of time and our frail boats sail forth on a spiritual adventure.

The Fish and the Moon

The Christian fish circle the seas and the tree roots, while a crescent moon in the waves at Mary's feet represents tides, times and the reference in Revelation to ‘woman clothed in the sun for her mantle, and the moon at her feet’ .

In some cultures, women are veiled. The veil here suggests a mystery eternally present, always hidden. From Phoebus Apollo, the sun god to the Light of the World, Jesus Christ on the Cross is at eye level with His Mother, in the cross of the window. The other two crosses indicate the others crucified.

Three circle, the circle of light, the circle of Mary's motherhood and the circle intimated by the bird or the Holy Spirit are equal in size and distance to illustrate the trinity of Father, son and Holy spirit. The pillar at the right, supporting an arch, hints at a Palladian window and classical architecture, and suggests Mary, Our Lady of Wisdom.

The distant city can be interpreted as the Rome of ‘non nobis sed urbi et orbi , not for ourselves but for our city and the world’ a place d political and social action.

The swing is an image of where we are, or where we hope to be. Swinging in from a world outside the definition of this window, the swing is motionless until moved by the Spirit of the Child within, who will grasp and articulate a new vision. Then, growing creatively together we can say with Mary, ‘My soul doth magnify the Lord and my spirit hath rejoiced in God my saviour’.