An Opportunity for Kindness 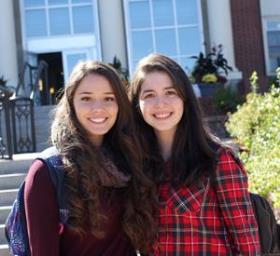 One reason Diana Chavez, of Quito, Ecuador, chose St. Thomas was for its tight-knit and welcoming community—something she experienced first-hand during her first week on campus.

Chavez was at Casino Night and was vying for the grand prize: a $300 Air Canada gift card. Her intention was to put the prize toward a flight home at Christmas, which could cost up to $1,200.

“Although I’m here on a scholarship, my parents are making an effort to pay for STU. I wasn’t sure I would be able to go back home for Christmas even though I really wanted to,” Chavez said.

“I was hoping to get the Air Canada gift card so I could help my parents pay for the ticket, which is really expensive. That evening, some of my friends left Casino Night but decided to leave their monopoly money with me.”

Across the room, another group of friends were pooling their money together. Jenicca Jean, of Nackawic, NB, hadn’t won a prize all night, so people started giving their leftover winnings to her.

“I was bidding for things, but I kept getting out-bid,” Jean said. “At the end of the night, everyone who had money leftover kept giving it to me for the gift card.”

The two groups went head-to-head for the final auction item, but Jean ended up with the most money and won the gift card. When she walked to the front of the room to accept her prize, she immediately presented it to Chavez.

“When she gave the gift card to me I just cried out of pure happiness,” Chavez said. “I think in that very moment I felt what STU was like. I felt so loved by people.”

For Jean, giving the card away was a no-brainer.

“Sometimes you see the opportunity to do something kind and you just do it. I can’t imagine not being home for Christmas,” she said.  “It’s amazing we were able to make a difference and that Diana will get to go home and see her family. I may not have come away with any prizes at Casino Night, but I gained so much more.”

A couple of days later, Chavez ran into Jean in the cafeteria to let her know she was making Christmas plans with her family.

“I’m really looking forward to visiting my family and friends,” Chavez said. “When I ran into Jenicca I promised to send her pictures of me and my family while I’m there.”