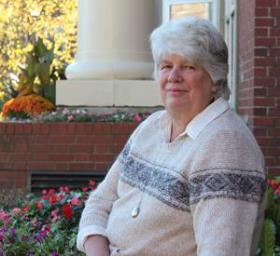 Award-winning journalist Christine Morris will be the Irving Chair in journalism for 2017-2018.

A former writer for the Halifax Herald, the Canadian Press, and the Telegraph-Journal, Morris will spend 10 weeks on campus during the academic year working with students and teaching classes. She will also give a public lecture.

“I’m looking forward to meeting the students and helping them hone their skills in whatever way I can,” Morris said. “The ability to write with accuracy and clarity is wonderful to have in any field, especially journalism. Our craft is evolving very quickly, but strong writing will always have a preeminent place.”

Morris, of Halifax, NS, holds degrees from Saint Mary’s University, the University of Kent in Canterbury, England, Queen’s University, and Western University. She began her journalism career in 1975 with a position at the Herald, before moving on to the Canadian Press where she spent the majority of her working years.

“I was an arts student at university. I couldn’t do math or science, but I always liked writing,” Morris said. “I enjoy meeting people and travel, so journalism seemed perfect. In over 40 years, there was never a day when I wished I was doing something else.”

Morris served as a Washington correspondent during the Bill Clinton presidency and spent time in the USSR on two different occasions chronicling the disintegrating Soviet system. She has been nominated for National Newspaper Awards four times and won twice—once as part as of the Canadian Press team that covered the Swissair tragedy and once as part of the Brunswick News team that covered the Richard Oland murder and police investigation.

Morris has also received lifetime achievement awards from St. Thomas and from the Atlantic Journalism Association.

The Irving Chair in Journalism is a $1-million endowment of the Irving family that brings a distinguished journalist to St. Thomas University annually.