Extending Their Boundaries in Korea 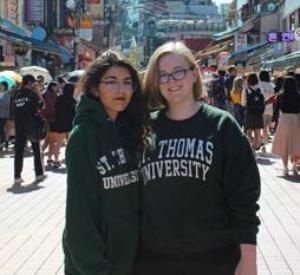 Alexis McCormack and Hannah Johnston are one month into a semester-long exchange to South Korea and have already been impacted by their experiences inside and outside of the classroom.

McCormack and Johnston, both of Hartland, NB, decided to spend the first semester of their fourth year fully immersed in the culture of another country. What they’ve learned so far—about South Korea and about themselves—has made a lasting impression.

“I’ve had to learn to adapt and communicate without knowing much Korean, and this has definitely changed how I view language. It’s made me realize how much we take the ability to communicate with the people living in our country for granted,” Johnston said.

For McCormack, who is working toward honours in English with a concentration in Creative Writing, a kind gesture from a local bridged the gap between culture and language.

“After having hiked a mountain, an older gentleman greeted my friends and I. He asked if we were students and what country we were from,” McCormack said.

“He didn’t know any English and I only knew enough Korean to answer those questions, but for a moment we were all experiencing the hike and the view together, despite the language barrier, our ages, our cultures, and our personal histories.”

Although travelling to another country can seem overwhelming, Johnston, who is double majoring in English and History, felt it was important to extend her boundaries.

“Your university years are a time when you’re figuring out who you are as a person, and going on exchange really forces you to learn a lot about yourself,” she said.

“This experience has taught me that I’m much more adaptable than I thought I was, and it’s also changed my outlook for the future.  Although I still want to teach English abroad, I’ve realized how important it is to focus on my own country—to teach English to immigrants coming to Canada to ease their transition to a new country, because I know now how difficult that can be.”

The pair intends to see and learn as much as they can in the time they have left in South Korea.

“I’ve become more aware of how quickly time passes,” McCormack said, “and how important it is to learn and to appreciate each other, our days, and ourselves.”

St. Thomas has agreements with several universities around the world, allowing students to spend a semester or year in another country while earning university credit for classes taken while there. International Exchange destinations include: Australia, Brazil, Chile, China, France, Japan, South Korea, Spain, Sweden, and Turkey.