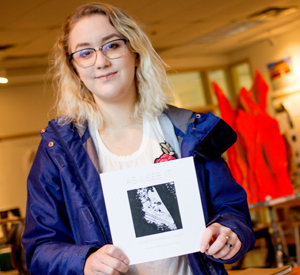 For a group of Fine Arts students at St. Thomas University, what started as a class project has turned into a published work.

Students in Professor William Forrestall’s FNAR-1113 Practical Introduction to Art Fundamentals course have collaborated with leading Maritime author and STU alumnus Raymond Fraser to create the book “As I See It,” which includes poetry by Fraser and photographs by students.

Savanah Herrington, a first-year student from Fredericton, NB, said this project is already one of the highlights of her time at St. Thomas.

“This will be one of the biggest memories I have from STU, that my first year in university my art was published and out in the real world,” she said.

Each student chose one of Fraser’s poems and was then tasked with taking five photos they felt represented the writing. Once they had the photos, Fraser visited the class and provided his opinion to help them make their final selection.

“My photo is featured with the poem Gone Again and it spoke to me as more of a nature piece,” Herrington said. “I took a photo by the Regent Mall of a really nice sunset, which I thought worked well with the piece.”

Herrington said working with Fraser was an amazing opportunity.

“He gave us feedback on the stuff we were doing and he was really positive about it, which reinforced that what we were doing mattered,” she said.

Fraser gives full credit to Professor Forrestall for the idea and said the rest was the good work of the students.

“I provided the poetry and that was about it for my contribution. Even the order the poems appeared wasn’t mine,” he said. “The students, being scholars of art, were more given to the visual than the verbal, but they entered into the spirit of the project and were very good-natured about it.”

Students also worked with designer Amna Khursid, who helped with the layout of the book, and STU English professor Tony Tremblay, who wrote the book’s introduction.

The “As You See It” project is part of a larger initiative known as Xeno-Optic—a multi-platform project that’s designed to bring together professional artists and writers to work with STU students.

“Xeno-Optic will create experiential learning opportunities for students as they engage with artists on developing projects that offer real world experience,” he said. “Students will complement their liberal arts education and foster the critical engagement skills that are valued by employers.”

For Herrington, who is studying Fine Arts and Psychology with the goal of becoming an art therapist, seeing her in-class work come to life through “As You See It” was encouraging.

“Seeing what we’re learning actually come together in a book shows that if you take any of your skills from class you can always apply it to the real world,” she said. “It shows that you can always find a way to get your work out there, even if it means working with other poets, artists, or writers.”

“As You See It” is now available at the University of New Brunswick bookstore and Westminster Books.