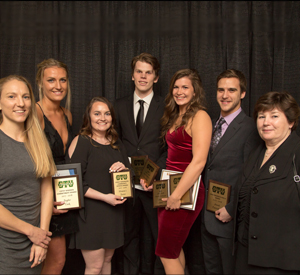 Christie, a first-year outside hitter from Langley, BC, was named the men’s volleyball Rookie of the Year and team MVP, while Jones was dubbed the top player for women’s volleyball.

Christie had a remarkable debut with the Green and Gold, earning the Atlantic Collegiate Athletic Association’s Rookie of the Year award as well as a selection to the all-conference team. He finished the regular season with 126 kills, 60 digs, 12 blocks, and six service aces.

His strong play was crucial in claiming the 2017-2018 ACAA title—he boasted 24 kills and 12 digs in the championship match against the Holland College Hurricanes.

Despite his individual success, Christie is most excited to see how the Tommies program will develop over the next few years.

“We have a great young core coming back next year,” he said.

“Hopefully we’ll win a game at nationals and make it to the semifinal, get a medal, and continue growing every year.”

Jones, who is finishing out her career as a Tommie, earned an ACAA first team all-conference award and was second in the conference in service aces with 54, third in kills with 160, third in points with 224, and fourth in digs with 187.

Her leadership was key for the young Tommies team that claimed a silver medal after a strong playoff run on home court. Jones was a force throughout that weekend, amassing 36 kills and 35 digs in three games.

“It’s a lot about passion,” Jones said. “I show a lot of passion on the court and the girls feed off of it. It’s an easy thing to catch on to.”

“I’ve never seen a bigger support system from a school, for athletes and students in general. Fredericton stole my heart, so I’m going to stay around for a while.”

Senior Tommies Taylor Cook, of women’s hockey, and Jonah Burridge, of men’s volleyball and golf, were recognized for their commitment to the Green and Gold and their representation of the athletic ideal.

Cook, a fourth-year netminder from Brantford, ON, was the recipient of the Cathy Wadden Commitment Award. The veteran Tommie made a considerable impact in the classroom and the community this year as a  USPORTS Academic All-Canadian and Vice-President of the STU Student Athlete Council (STUSAC). In her position with STUSAC, she organized multiple activities, including a food drive that collected 2,000 items for the STU Food Bank and the Fredericton Food Bank at Greener Village.

Cook was also involved in collecting hygiene products for incarcerated women and youth in the province, participated in the President’s Gala Auction, and worked with local athletes in high schools as well as the Brendon Oreto Hockey School.

“It’s very humbling,” Cook said after receiving the award. “It was a lot of hard work to put into the community and into the hockey team as well, but it was really rewarding—especially the food drive as it was a student-led initiative.”

Burridge, a fifth-year student athlete from Fort St. John, BC, was recognized with the John Frederick Walls Memorial Award. A member of the men's volleyball and golf teams, the double Tommie earned the Canadian Collegiate Athletic Association's National Scholar award for 2016-2017 and is on pace to earn the distinction again this season while juggling the demands of the Education program.

His dedication to the Tommies was evident on the court this season—after spending four years as libero Burridge was moved to setter where he led a young STU volleyball squad to an ACAA title.

“I’m very appreciative of this award—it surprised me, but it’s awesome,” he said.
“It’s been an awesome five years. It’s going to be bittersweet moving on, but I’m looking forward to starting my teaching career. I recently signed a contract for a job next year back in British Columbia, so I’m looking forward to that.”

The ACAA champion women’s soccer team was also rewarded for their work in the community as the 2018 recipients of the LeRoy Washburn Community Service award. The STU squad has given back to local youth teams, has volunteered in campus Think Pink and Bell Let’s Talk initiatives, as well as the Harvest Jazz and Blues Festival.