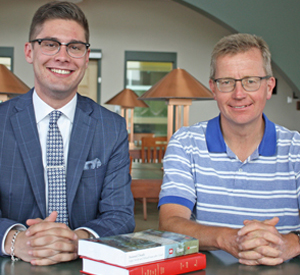 LeBlanc, along with Dr. Tom Bateman of the Department of Political Science, co-authored an article titled “Dialogue on Death: Parliament and Courts on Medically-Assisted Dying” which was published in the Supreme Court Law Review and Assisted Death: Legal, Social, and Ethical Issues after Carter.

“It’s very surreal to look at the cover and then flip through and see my name,” LeBlanc said. “To read the words on the page and hear my voice is very cool.”

The article uses the Carter decision—which gave Canadian adults who are mentally competent and suffering intolerably and enduringly the right to a doctor’s assistance in dying—to examine whether parliamentarians in the House of Commons and the Senate fully accepted the Supreme Court’s decision or if they demonstrated independence of thought in creating policies and legislation.

“The theory is called dialogue theory,” Dr. Bateman said. “It’s the idea that the Supreme Court is not the sole policy maker in Canada in the age of the Charter and that it contributes some information to good policy making but it doesn’t eclipse the legislatures.”

With large amounts of content to analyze, Dr. Bateman decided to enlist the help of a student on the project. He had taught LeBlanc, helped supervise his honours thesis in Political Science, and knew he was able to complete the work.

“Working with Dr. Bateman was a wonderful experience,” LeBlanc said. “It was neat to work alongside him, to see how his mind works, and then to fit my portions of the project into his vision. It was a great collaboration.”

It was also great experience for LeBlanc, who is spending the summer working at a local law firm before he begins his Law degree at McGill University in the fall.

“This project taught me how to conduct legal research, ways to think about legal issues, and to apply my critical thinking skills from STU into something specific,” he said. “It was great training wheels for my future law career.”

LeBlanc hopes to practice Constitutional Law and has an interest in the fields of labour and employment as well as corporate law. LeBlanc believes his time at St. Thomas provided him with a “leg up” heading into law school.

“People that go to law school come from all different backgrounds and some go in without the reading comprehension or critical thinking skills that a liberal arts education can teach them.”

“The constitutional law that I learned through this project, my education at STU, and Moot Court will be incorporated in whatever field I choose to practice in,” he said.