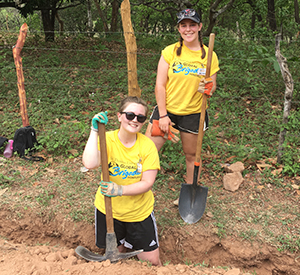 STU students Anna Sirois, of Edgecomb, Maine, and Emily Miller, of St. Peter’s Bay, PEI, traveled to Honduras as members of the STU chapter of Global Brigades. Global Brigades is the largest student-led movement for global health in the world.

“I joined because I wanted to make a difference in the world,” said Miller, who is studying Human Rights and International Relations. “When you talk about human rights there is the entitlement of the individual, but there is also a duty. I have access to so many entitlements here and so the idea that others don’t have access to their rights isn’t right to me.”

Global Brigades uses a holistic model for their international development, which means they seek to empower the community to sustain themselves by developing infrastructure. Sirois, who also studies Human Rights, said that this method of empowering the community is partly why she joined.

“I chose to join STU Global Brigades because I really believed in the efforts they were doing,” she said. “Uplifting one family or even one person I truly believe can create a ripple effect, and I think Global Brigades does an amazing job.”

Miller said Global Brigades tries to connect with the communities and ensure their needs are met.

“With NGOs, sometimes donors can dictate how that money is spent, but it might not be what the community needs. Global Brigades works with communities that request their help, which I think ensures that the money is going where it is needed, because that is where the community is saying it needs to go.”

This year the team from STU was a part of a public health brigade. They spent the majority of their week in Honduras building hygiene stations in family homes, under the supervision of a local mason.

“It was a tougher job than I had expected,” said Sirois. “We had to mix the cement, carry heavy buckets and blocks around, and learn from the masons despite the language barrier.”

Despite the difficulty of the work, the team was rewarded with the gratitude of the families and the connections they made.

“As a student who has now taken six years of Spanish, I gained the confidence to speak to the masons as well as the family in Spanish in order to interact with them,” said Sirois. “For the amount of Spanish I was able to muster, I created a friendship. Even a smile with them went more miles than I ever thought it did.”

The rest of the brigade was spent digging trenches that would eventually hold water pipes and educating children on the importance of dental hygiene.

“All of the work we did was important because it helps these communities to believe that there are people who want them to succeed, thrive, and overcome challenges, and not just be given enough to survive,” said Sirois.

Global Brigades is a year-long effort, with student teams from across North America traveling to Honduras, Nicaragua, Panama and Ghana to work on these development projects year-round.

“While we are only there for a week, we are one week out of a 365-day effort that is non-stop throughout the year,” said Sirois. “I like to think of it as we are one drop of many to eventually form an ocean of sustainability and empowerment.”

Watch the video from their Public Health Brigade in Honduras here.