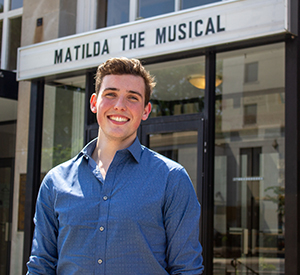 Fine Arts student and aspiring director Ben Smith decided to pitch the idea of directing a musical as part of his honours thesis to his professor. One year later, Matilda the Musical—a 30-cast member, full musical production—will run at the Fredericton Playhouse from August 15 to August 17.

When Smith, who grew up in Fredericton and was active in the theatre community, started at STU, he had a dream of someday becoming a director. When he arrived on campus and began his studies, he said he began asking himself how he would make his dream a reality.

He pitched the idea of directing a musical to his honours supervisor, Fine Arts professor Tania Breen. Breen said she was confident that Smith was going to be able to handle a project of this scale.

“Ben has been training within the large-scale musical model for most of his life, so while this would be an insurmountable challenge for many, we knew that Ben would be able to see this through to completion,” she said.

Originally, Smith thought the show might find its home on campus. However, along the way, he decided to try for something bigger.

“On a whim, I walked down to the executive director’s office of the Fredericton Playhouse and pitched the show to him,” Smith said. “After several meetings and reaching out to local artists, the whole idea grew from just my thesis project to a massive community project with industry professionals.”

The production has a 30-person cast, including 11 children. Smith said having children in the play adds something special.

“Kids are brilliant because they’re fearless,” he said. “Kids don’t edit their thoughts. When an adult tries to be sad, they think about it and begin to dissect it, but the kid knows what sad is and they just do it. It’s been an absolute pleasure and honour to work with kids on this production.”

“When you see this kind of talent in someone, you must support it”
– Professor Tania Breen on her student Ben Smith, director of Matilda The Musical

Smith credits Breen, who has been his mentor—first at TNB and now at STU—for encouraging him to pursue directing. Breen said it was clear this was the role he was meant to play.

“Even in his early years when a problem would arise—a forgotten prop, a line dropped, a set piece not moved—Ben would appear ‘in character,’ hardly noticeable, and supporting the narrative. He would fix issues someone else had created without the audience ever realizing the problem existed. True directors are rare.  When you see this kind of talent in someone, you must support it.”

Smith directed a play in his last year of high school and has been the assistant-director on two TNB productions. This is his first time leading a production this large.

“One year ago, this was an idea and now here we are,” he said. “I never thought I would be directing a show at this scale, but here I am. What I’ve been saying is that good theatre is made by good people, and I have been spoiled with the best.”

Matilda the Musical runs Aug. 15-17 with 7:30 pm shows every day and a 2:30 pm matinee on Saturday. Tickets are available through The Fredericton Playhouse website.