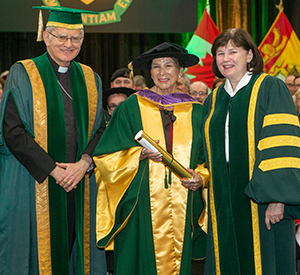 Members of the St. Thomas University community are invited to submit nominations, in writing, by 12:00 PM on Friday, December 13, 2019, for honorary degrees from St. Thomas. All nominations must remain confidential at all stages of the process.

While flexibility is the norm, persons submitting nominations ought to be guided by two questions:

a) What distinction has the person achieved as an academic, artist, educator, administrator, public servant, or scientist, or in any other recognized way?

b) What significant contribution has the person made, directly or indirectly, to the life of the university, the local community, the province, the region, Canada, or the world?

No strict categories of recipients are defined, but the following guidelines are suggested:

a) That, normally, recommendations shall include at least one distinguished scholar for each ceremony;

b) That the nomination and recognition of people not already honored by other institutions, or in a public manner, be encouraged;

c) That the University not normally bestow honorary degrees on currently serving members of the Board of Governors, faculty, staff, or currently-sitting politicians (e.g., MLAs, MPs, mayors, etc.) who serve the local jurisdiction; and

d) That nominations remain before the Nomination Committee for three years.

Using the form below, provide a nomination to the Committee that reflects your confidence in the nominee's worthiness to receive an Honorary Degree from St. Thomas University.  Providing only material printed from websites, URLs, and/or printed copies or links to curriculum vitaes or resumes will not be considered sufficient material for adjudication of your nomination.

Submissions should be received by the undersigned no later than 12:00 noon on Friday, December 13, 2019.