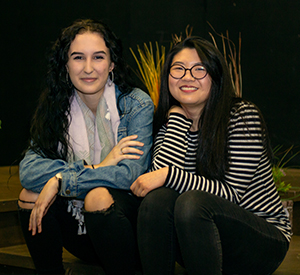 Graduates Kira Chisholm and Wei Qing Tan work in different parts of theatre production, but they both love it for the same reason—the process of bringing their imagination to life. This fall, they will both take that shared passion to the National Theatre School in Montreal.

As a stage manager, Tan works behind the scenes to build sets and organize crew members.

“When an audience comes to a show all they see is what has been done,” she said. “They might not realize there is a whole team that put these sets together. There are all these ideas that are turned into actual, tangible things. Being a part of that process is very fulfilling.”

As an actress, Chisholm’s process of bringing characters to life is diligent, rigourous, and thoughtful.

“I love the cerebral activity of diving deeper,” she said. “If I am playing an unpopular character, I love to really explore them, because they are human being. You can’t make assumptions, or you aren’t doing justice to their story.”

“The way they explained it is they give you the tools to follow your curiosity and your imagination,” said Chisholm. “Their goal is to help you discover your own process and your own voice, so you can go out and create whatever you want.”

“Knowing there is constantly more you can do, I think that’s really exciting,” said Tan. “I value being able to get this education from NTS, because I think it would help push me to achieve more.”

Chisholm, who graduated with double Honours in English and Political Science, knew theatre school was in her future but wasn’t ready for it after high school.

“A lot of my friends went to theatre school right out of high school, but I decided I wanted to grow up a little bit more and learn other things. STU’s been the best decision I have ever made. Now I feel like I have more to bring to the table.”

Tan did theatre in high school but didn’t feel like she had enough experience to pursue it as a career. She came to STU for Psychology and Sociology, and she graduated with a double major.

“Researching schools, I found STU, and Theatre St. Thomas, so I told myself I am going to come here and get my liberal arts degree and participate in extracurricular theatre.”

But the more she participated in productions, the more confident she grew in her abilities.

“Just being in the space, hearing the conversations and how people frame things, it just starts to make more sense after you’ve been in it for a while. In first year, I never would have dreamed this could be a possibility. Over the next three years, I think I just want to see how far I can go.”

Chisholm hopes to bring what she learns back to New Brunswick.

“I think I need to go away, spread my wings, try other things, meet new people, and learn as much as I can so that eventually I have something to share with the community that has supported me in so many ways.”