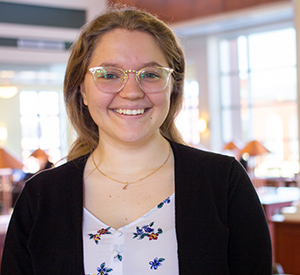 Fourth-year student Elizabeth Tuck from Mount Pearl, NL, has been awarded a prestigious Rhodes Scholarship to pursue post-graduate studies at the University of Oxford.

The Rhodes Scholarship is the oldest and one of the most prestigious international scholarships and provides recipients funding to study at Oxford. It is awarded annually to only 11 students across Canada.

“I was shocked,” she said about getting the phone call. “I yelled and paced back and forth, and then called everyone. It was a lot of feelings all at once. I was crying; my friends were crying. It was surreal. It still is.”

Tuck is completing a Bachelor of Arts with Honours in Human Rights and majors in Political Science and Great Books. She plans to continue her research on how different social identities—particularly gender—affect policy during her studies at Oxford.

Her honours thesis at STU, “United States Workplace Harassment Jurisprudence in the era of #MeToo” explores modern understandings of workplace harassment, specifically in California and New York where state laws have already begun to evolve.

“I love law, and I’m passionate about gender issues; how the two relate to one another is evolving so rapidly. It’s important to be studying this now,” she said.

Tuck, a Deans’ List student and recipient of many STU and external scholarships, is currently an amendment captain of the university’s highly successful moot court team. She has been one of the most successful mooters in program history, earning a bid to the national competition each of her three years as a participant. This year, she and her moot court partner, Husoni Raymond, earned first place at the regional tournament in Orlando, Florida, and this coming summer, she will represent STU at the Nelson Mandela World Human Rights Moot Court Competition in Geneva.

In addition to her academic success, Tuck’s community and leadership involvement has been extensive.

In 2015, she was selected to represent Girl Guides of Canada at the Sangam International Guiding World Centre in Pune, India, where she participated in a women’s leadership development program.

“That was absolutely a pivotal experience and a changing moment in my life. It was the first time I believed myself capable of fostering real and sustainable change,” she said.

Since then, Tuck has held leadership roles in national organizations and was awarded the Chief Commissioner’s Award from Girl Guides of Canada. She is currently Special Events Director for Girl Guides of Canada-Newfoundland and Labrador. She also serves on the national animation team for YWCA Canada, and is a Young Director with Girls on Boards, a program that challenges low female representation on governance boards by placing participants non-profit governance boards in their communities.

She has served as a conversation partner at STU, meeting with English Second Language students to help them develop skills and confidence in English, is a residence coordinator, and has been on the Sexual Assault Prevention Committee.

Through her involvement with the Out of the Cold Emergency Shelter in Fredericton, where she worked evenings, overnights, and cleaning shifts, she said she learned about the realities of housing insecurity.

The Value of a Liberal Arts Community

Tuck began her studies at STU in the First-Year Aquinas: Great Books and Human Rights program, where she said came to realize the value of interdisciplinary studies. In addition to her chosen honours and majors subjects, she said she’s had her worldview opened through courses in History and French.

From profs to peers, Tuck said her support system at STU has been second to none and has helped her get to this moment.

“From first year, my professors have been so welcoming and supportive. They’ve encouraged me to ask questions and taken time to explain things in a non-judgmental way. I’ve had professors who thanked me for coming to their office hours to talk about classwork. They also often ask me how I am—as a person, not just a student,” she said.

“Dr. Matt Dinan and Dr. Andrew Moore in Great Books, Dr. Patrick Malcolmson and Dr. Tom Bateman in Political Science, and Dr. Amanda DiPaolo, who is my thesis advisor and also someone that I admire and respect so much for how hard she works for her students, have all helped me grow as a student and as a person.”

As for Oxford, Tuck said she’s looking forward to many things, but most of all, the people.

“Oxford is global crossroads—there are so many different, diverse, and interesting people who go there or engage with it. I’m excited for that. I’m also excited to keep learning and researching, because I am so passionate about what I study,” she said. “I think it’s going to change me and open me up in ways that I can’t comprehend right now.”