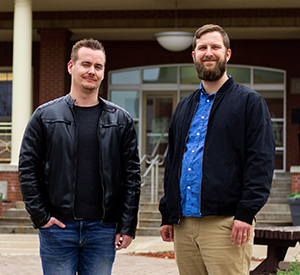 “Food security affects all aspects of a student’s success,” said Stafford. “If a student is struggling or worrying about food they aren’t going to perform as well academically.”

“There’s a group called the Meal Exchange and they are basically the only student food advocacy group in Canada,” said Ecker. “They say that every two out of five students in Canada are food insecure.”

Ecker and Stafford have done surveys and interviews with students to find out how STU fits into this national movement and will be presenting their findings at the Social Action Fair on June 20 with the other Bachelor of Social Work students.

“We do two placements in a year—social action and direct practice—and this year we’ve done our social action first,” said Ecker. “At the social action fair all the different groups get together and we showcase our work.”

Stafford, who has worked as a front-line support worker, said he decided on STU’s Social Work program so he could tackle the issues he saw from a different angle.

“I was a family support worker for five years and I also worked as an educational assistant in the school system,” he said. “I’ve made a career working with kids, so it was the logical next step for me. Now I can take the problems I was working on when I was front lines and address them from a top down perspective.”

Ecker said he decided on social work because he wanted to feel empowered to affect change, a reason he said many of his classmates shared.

“I was a pastor before, and I felt like I didn’t really have the tools to create broader change. As a support worker and a youth pastor I would see kids and sort of push them back into their lives, not really able to do anything. I think for a lot of us it was sort of the same thing. We wanted the opportunity to have a little more knowledge and know-how so we could do more.”