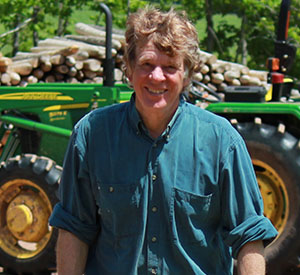 This honorary rank is awarded to retired professors who have served the University with great distinction through teaching of exceptional merit, research and publication of unusually high quality, and a notable contribution to the administration and development of the University.

“Being granted professor emeritus status caps the enormous good fortune I had to have finished my academic career with the St. Thomas history department,” Dr. Bittermann said.

After earning his BA from UCCB and MA and PhD from UNB, Rusty was a SSHRC Research Fellow at UNB and a Killam Fellow at Dalhousie, and he taught at UNB and UCCB before joining STU’s Department of History in 2000.

For more than 15 years, he taught courses in Canadian and world history, and developed numerous new courses including thematic world history courses on water, the environment, agriculture and social movements. He was at the forefront of the movement to link Canadian history to global historical and historiographical trends.

In the classroom, he balanced the high academic demands of his courses with mentorship of his students. One former student describes him as a “gifted educator who brought history to life” and added she has “never been so enlivened in a classroom before or since.”

He served as department chair and led the development of the World History program, which is one of the first in Canada with the fullest array of course offerings.

As a colleague at another university noted, Rusty’s work “exemplifies the important principle that excellence in scholarship bearing on Atlantic Canada is not only important in itself, but also has a profound importance for thematic and geographical areas that extend far beyond the region. He is an internationally recognized historian of outstanding quality.”

He has published three books with leading university presses, authored 23 journal articles in national and international journals and delivered 30 conference presentations. A number of these articles have been reprinted in important collections. His book, Sailor’s Hope: The Life and Times of William Cooper, Agrarian Radical in an Age of Revolutions, won the Atlantic Book Award for Historical Writing. His scholarly work has earned a lengthy list of external awards, prizes and research grants including two Canadian Historical Association Helen Neatby Prizes for outstanding writing in women’s history, its Clio Award, and awards from the PEI Museum and Heritage Foundation Award. He received STU’s Special Merit Awards for Excellence in Teaching and for Research, as well as the Outstanding Career Research Award. He also organized national and regional conferences, served in editorial and executive positions with academic journals and completed manuscript reviews and grant evaluations for scholarly journals, academic presses and granting bodies.

In retirement, Rusty has transferred his interest in the history of agriculture and rural life to the operation of a 300-acre farm with heritage breeds of cattle and sheep.

“Farm work provides me with ample opportunity to reflect on my years at St. Thomas, and I remember them fondly. I had great colleagues and great students.”