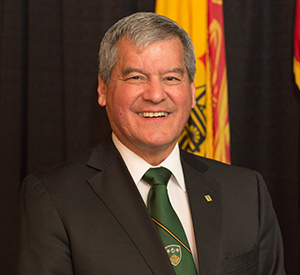 The Board of Governors of St. Thomas University has appointed former Lieutenant Governor of New Brunswick the Hon. Graydon Nicholas as Chancellor of the university.

The announcement was made by Peter R. Forestell, QC, Chair of the Board of Governors, and Dawn Russell, President and Vice-Chancellor. The Chancellor is an ex-officio member of the Board and presides at Convocations, as well as assists in the development of the university and undertakes work related to its mission.

“Graydon Nicholas is very well known and respected both on our campus and across the country. He has excelled in many different roles—as a lawyer, activist, and jurist—and his teaching and community interactions have long benefited our University. As Chancellor, he will bring unique knowledge and perspective from his experiences in law, social work, treaty and Indigenous rights, human rights, Indigenous political development, and public service at the regional, national, and international levels,” said Forestell and Russell.

“I am deeply honoured and humbly accept this position,” said Nicholas. “Members of my family attended STU when it was in Chatham and Fredericton, and our two sons attended STU — so I will do my best to begin a new chapter of my family's connection with STU.  STU has a remarkable relationship with Indigenous students and communities, and my wife Beth and I are excited to be an even stronger part of the university in the future.”

“We want to thank Graydon and his wife Beth for accepting this important role. They have been long-standing supporters of STU and their personal commitment to education and community service align with our values. Graydon’s life and work has been about hope and the possibility for a more tolerant and understanding society, and we are pleased that he will continue that work at STU,” added Forestell and Russell.

Nicholas earned a Bachelor of Science from St. Francis Xavier University, a Bachelor of Law from the University of New Brunswick, and a Masters of Social Work from Wilfrid Laurier University. He worked with the Union of New Brunswick Indians as legal counsel and then as its Chair and President. As a jurist he argued cases at all levels including at the Supreme Court of Canada and was a Provincial Court Judge from 1991-2009. With former Supreme Court Justice Gerard V. La Forest, he co-authored the March 1999 Report of the Task Force on Aboriginal Issues at the request of the New Brunswick Government. He was Lieutenant Governor of New Brunswick from 2009 to 2014, becoming the first Indigenous person to hold this office. He was the Endowed Chair of Native Studies at STU from 1989-1991 and was reappointed in 2015, a role that he will continue.

He has received honorary degrees from St. Francis Xavier, Wilfrid Laurier, Mount Allison, and UNB. Numerous awards have recognized his long-standing community service, including the New Brunswick Human Rights Award, the Fredericton YMCA Peace Medallion, the 125th Anniversary of the Confederation of Canada Medal, and the Queen’s Golden Jubilee Medal. He has been a member of the Knights of Columbus since 2009 and was elected a Supreme Director in 2015 and a Supreme Warden in 2018. He and his wife Beth are members of the Christian Life Community and served as national Co-Presidents. He is a recipient of the Benemerenti Pontifical Medal presented by the Apostolic Nuncio to Canada in 2008. He was appointed an Honorary Colonel for the 3rd Field Regiment (The Loyal Company) in 2019. He was appointed as an independent member of the General Insurance OmbudService, a national dispute resolution service, and serves as co-chair.