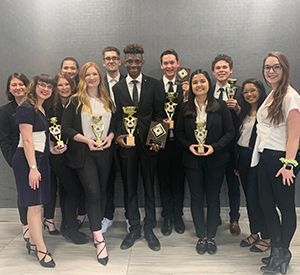 St. Thomas Moot Court was among the top teams at the Osgoode Cup—a national undergraduate competition in Toronto.

Husoni Raymond, who was named Top Advocate at the event, and teammate Brandon Case finished second, while STU teams of Sarie Lakes and Victoria Loucks, and Valeria Espinal and Marc Edgar advanced to the quarterfinals.

“This is only STU’s second year competing at the competition, so it’s an honour to have finished second after our university won the whole thing last year,” Case said.  “Husoni and I were undefeated on the first day of the competition with a 4-0 record and won all of our elimination rounds until the final round.”

Participants were arguing a case concerning professional misconduct in the courtroom based on the Supreme Court of Canada case Groia v. Law Society of Upper Canada. Students debated the appropriate standard of review and what considerations should be made when evaluating whether a lawyer's conduct in the courtroom amounts to professional misconduct.

Case and Raymond bested Memorial University, Wilfrid Laurier, the University of Guelph, and two teams from St. Thomas before falling to Carleton University in the final round.

Following the competition Raymond was named the Osgoode Cup Top Advocate out of 240 participants, while Case and Edgar received distinguished speaker awards.

“Being named as the Top Advocate out of 240 participants is encouraging since I’m considering law school in the fall and moot court is a big component of that,” Raymond said. “We put in a lot of work in developing our submissions and practicing to deliver them without the use of notes so it feels good for that work to be recognized.”