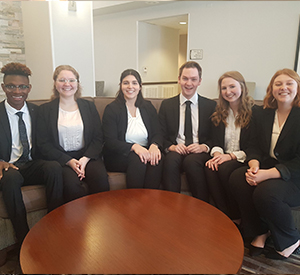 Husoni Raymond and Elizabeth Tuck, and Grace Baker and Megan Cormier tied for 17th place at the American Moot Court Association National Tournament out of 474 teams that competed nationwide throughout the season.

“The competition seems to get harder each year,” Raymond said. “Elizabeth and I invested a lot of time preparing for the competition and we did our best in each round, so I’m proud of how far we were able to go.”

Throughout the national event, Raymond and Tuck faced teams from Georgia State University, the United States Air Force Academy, and the University of Chicago. The highlight of the tournament though was winning their round against the team from Patrick Henry College that won the Tommies’ Tournament in December.

“It was very close, and they were hard competition,” Tuck said. “To be able to beat a team of that calibre was certainly an accomplishment.”

All three STU teams advanced to the second day of competition and following the final round Case was named a top orator, placing 9th overall.

“It was a complete shock, but it was amazing to receive recognition for the hard work that I have put into the program for the past two years,” Case said of the award. “To be among the top ten speakers in the entire competition was one of the best moments of my entire Moot Court career at STU.”

Case credits the success of STU Moot Court, especially in earning speaking awards during competition, to Dr. Amanda DiPaolo and her ability to motivate students.

“Dr. DiPaolo puts everything she has into the program,” he said.  “STU’s success can be credited to her invaluable experience, her exceptional ability to motivate her students, and how she helps students improve their skills and confidence.”

This was the final American Moot Court Association competition for Case, Ricketts, Raymond, and Tuck, who will graduate from St. Thomas this spring.

“The most valuable lesson I’ll take away from moot court is being able to listen to constructive feedback without taking it personally,” Raymond said. “As a result, I’ve developed numerous skills such as public speaking, time management, and answering questions effectively, and have sharpened my interpersonal skills.”

For Tuck, the experience was defined by the people she shared it with.

“I’m thankful for the lifelong friends that I’ve made through moot court and for the people I’ve met from universities across America,” she said. “It’s a pretty wild experience to be at the national competition and be stopping every few seconds to catch up with teams that you competed against at other competitions.”