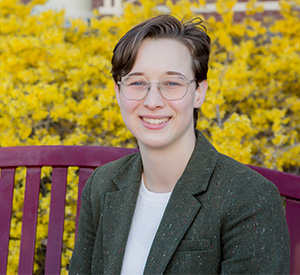 STU Bachelor of Arts alumna Abbie LeBlanc is heading to Harvard University this September to pursue her PhD in political theory.

LeBlanc plans to use Foucault as a lens to examine the social contract as a tool of violence rather than its general presentation in political history and political thought as being constructed by consent. She is also interested in feminist political thought, Indigenous political thought, and the history of settler colonialism in Canada.

“You don’t always think of the Arts as hands-on learning, but it is. It’s something you learn by doing.”

The Great Books, Human Rights, and Political Science alumna went on to pursue a masters degree at McGill University after graduating from STU in 2019.

She said STU’s first-year Aquinas: Great Books Program taught her skills in academic writing and shaped her as a scholar.

“The two big things we learned in Aquinas were to take what we read and talk about it—which is a really difficult and undervalued skill—and to write really well. To have informed discussions and debate on the fly with other people is difficult and you really only learn by doing it,” she said. “You don’t always think of the Arts as hands-on learning, but it is. It’s something you learn by doing.”

LeBlanc also attributed the personal attention she received from professors at STU for helping her stand out in her applications to graduate schools.

“I had a fantastic experience within my departments at STU,” LeBlanc said. “Everyone I worked with made an honest attempt to connect with students and ensure we were understanding and enjoying the courses.”

LeBlanc also played for the Varsity Women’s Rugby team while at STU and said both experiences helped teach her the value of teamwork in and outside of academia.

“I felt just as much comradery from my moot court experience as I did from rugby. They’re two very different types of teams but were both equally important to me during my time at STU,” she said. “In the real world, no one is working entirely on their own. You learn to work with other people and solve complex problems.”

Looking back on her time at STU, LeBlanc said studying the liberal arts truly does set graduates up for both a rewarding and meaningful career and life.

“You can do whatever you want with a liberal arts degree. You’re equipped to do practical work to make money, while also figuring out what you’re most passionate about—to discover what kind of job you want to pursue, or how to elevate your current job into something you love.”

As for after Harvard, LeBlanc said she hopes to return to STU to share her passion for academia as a professor.

“The reason I’m pursuing a PhD is because I want to come back and teach at STU, specifically because of how much it has going on. I really admire the professors I had and what they’re doing at STU—the kinds of programs, the exclusively liberal arts atmosphere, the great books and moot court programs—those just aren’t things you find at other schools.”