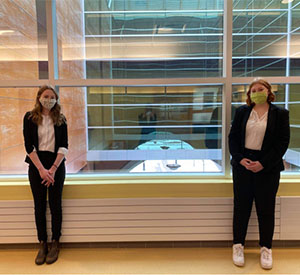 At the end of regular season, two STU teams—Megan Cormier and Grace Baker, Ashley Thornton and Emily Green—had officially earned bids to nationals. However, Ethan Nylen and Julia Evans—who were designated alternates for the national tournament—were called up shortly after the event began when a team from the United States had to step away for medical reasons.

Cormier and Baker finished in a tie for 17th place, and first-year mooters Thornton and Green tied for 33rd. Laura Rae and Mark Edgar's written brief placed fifth out of more than 100 submitted briefs, and Nylen and Evans’s brief placed seventh.

More than 500 teams and 1,000 students competed at this year’s regional tournaments hoping to be one of 100 teams selected to compete in nationals. All tournaments were held online this year due to COVID-19.

Due to the added challenges brought on by the pandemic, Dr. Amanda DiPaolo, Chair of Human Rights and Moot Court professor/coach said it was a particularly challenging year for undergraduate moot court.

“Competitors had so much to worry about—living through a pandemic and trying to learn online while also competing in one of the most grueling collegiate activities out there. I could not be prouder of what STU mooters accomplished this year. They are so resilient and impressive.”

Less than an hour’s notice before heading into national competition

Nylen said he didn’t expect to be called up, especially once the tournament started.

“I ran home from studying on campus and had enough time to throw on a suit, tie my tie, and stand in front of my computer to address the judges,” he said. “It was a really exciting experience.”

“What STU Moot does very well, that distinguishes us from other schools, is it prepares us for all sorts of scenarios,” Nylen said. “STU mooters are always some of the more prepared competitors.”

Baker said she would recommend Moot Court to any student who is considering it.

“It can seem intimidating at first, but everyone helps and supports each other,” she said. “The personal growth I’ve experienced throughout the program will transfer to all aspects of my life.”

The STU moot court experience has been made possible, in large part, thanks to a generous donation from Frank and Julie McKenna to create an endowment fund in the name of McKenna's longtime assistant Ruth McCrea.