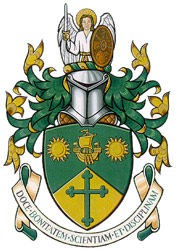 On May 12, 1997, during the St. Thomas University Spring Convocation, His Excellency, the Right Honourable Romeo LeBlanc, Governor-General of Canada, exercising the armorial prerogative of Her Majesty Queen Elizabeth the Second as Queen of Canada and by the terms of his Commission of Office, the Chief Herald of Canada granted and assigned to St. Thomas University the following Arms:

"Party per chevron Vert and Or in chief a Lymphad under sail oars in action between two suns in their splendour and in base a Latin cross botony all counterchanged."

And for a crest:

"on a helmet mantled Vert doubled Or within a wreath of these colours bearing the demi-figure of St. Michael the Archangel proper habited in a Robe Argent corded Or nimbed of the same holding in the dexter hand a sword proper hilted and pommelled Or and bearing in the sinister hand a target leathered and studded proper;"

And for a motto on a ribbon beneath the arms:

The armorial bearings granted to St. Thomas University is replete with symbolism which speaks to the origins, tradition and mission of the university.

The three principal parts of the arms include, the shield, the crest and a motto.

The "vert" and "or" referred to are the school colours of Green and Gold respectively. The division of the background formally known as chevron is like an inverted V. It is an adaption of the coat of arms of the Dominican Order of Preachers, to which the university patron, St. Thomas Aquinas belonged.

The two suns in their splendour are located "in chief" on the shield, that is in the uppermost third of the shield. The suns are symbolic of the learning or light of knowledge for which the community strives at St. Thomas University. The one being the light of the mindas exercised by the philosopher the other being the informing light of revelation as experienced by the theologian, each of which finds exemplar expression in St. Thomas Aquinas, the Angelic Doctor.

The cross in base, that is the cross located in the lowest third of the shield is symbolic of Christianity, which guides our learning. The specific cross is Latin in its shape which speaks to the Roman tradition of the St. Thomas University Catholic community. The tips of the cross is decorated with a triflor. It was the shamrock which St. Patrick used to demonstrate the Holy Trinity. St. Thomas University owes much to the faith of the Irish Catholic community in New Brunswick. The Latin cross botony often appeared on the calendar of St. Thomas University during the era that the university was under the direction of the priests of the diocese.

The lymphad or galley is representative of the Maritime province of New Brunswick. It also reflects the Miramichi and Saint John rivers along whose banks St. Thomas University, at various times, has been located.

St. Michael the Archangel is presented in the crest of the arms of St. Thomas University and speaks to the educational history of the Roman Catholic Diocese of Chatham and its cathedral St. Michael's.

The Right Reverend James Rogers was the first Bishop of the Diocese of Chatham being consecrated on August 15, 1860 and coming to the town of Chatham where he was installed as Bishop one week later. One of Bishop Rogers' first undertakings was establishing in his own residence of a school for ecclesiastical students.

These students gave a portion of their time to the classes of the day school for boys that was opened soon afterward. The modest structure in those pioneer days, known as St. Michael's Academy, served a diversity of needs, becoming in turn Bishop's Palace, College, and in 1869, the first abode of the Sister of Hotel Dieu.

In 1876, Bishop Rogers, having been able through untiring effort to provide accommodation for a larger school, brought the Christian Brothers to the Miramichi. A fire in 1878 completely destroyed the building. In 1880, the work of the Christian Brothers came to an end in the area. For a space of thirty‑one years, there was no Catholic institution in the diocese for English speaking boys in advance of elementary grades. Bishop Rogers died in 1903 and was succeeded by his coadjutor the Rt. Rev. Thomas Francis Barry.

St. Michael the Archangel is one of the principal angels; his name was the war‑cry of good angels in the battle fought in heaven against Satan and his followers. Five times his name is recorded in scripture: (i) Dan X, 13, (ii) Dan XII, 1, (iii) Dan X, 21, (iv) Epistle of St. Jude, verse 9, and (iv) Apocalypse XII, 7

Christian tradition gives St. Michael four offices: to fight against Satan, to rescue the souls of the faithful from the devil, to call away from earth and bring men's souls to judgment, and to be the champion of God's people; therefore, he was the patron of the Church and of the order of knights during the Middle Ages.

The crest is situated on top of a knights helmet which in turn is decorated with plumage of the university's colours of green and gold. The small figure of St. Michael rest on a wreath of green and gold. The figure is dressed in a silver robe with a gold belt. A sword is held in the right hand while a leather studded shield is held in the left hand.

In art St. Michael is represented as an angelic warrior, fully armed, with sword and shield. Often the shield bears the Latin inscription: Quis ut Deus.

The motto of St. Thomas University which appears on a ribbon beneath the arms reads:

The English translation of the motto is:

"Teach me Goodness and Knowledge and Discipline"

The origin of this motto can be found at verse 66 of Psalm 119 which in various versions of the Bible provide as:

"Teach me wisdom and knowledge for in your commands I trust"

"Inspire, instruct me – all my hope is in thy covenant"

Psalm 119 is an acrostic poem; each of the eight verses of the first strophe begins with (Aleph) the first letter of the Hebrew alphabet. The second eight verses begin with (Beth) the name of the second letter of the Hebrew alphabet; and so to the end of the twenty‑two lettered alphabet. It is under the letter (Teth) where we find verse sixty‑six which is a source of the St. Thomas motto.

The coat of arms and motto of the Basilian fathers had been used on the calendars of St. Thomas College for several years. This practise extended beyond the period of 1910 to 1923 when the College was under the direction of the priests of the order of St. Basil. The motto of the Basilian fathers was also inspired by verse 66 of Psalm 119 which is sometimes referred to as the "Beati immaculati" and reflects the excellence of virtue consisting in the observance of the commandments of God.

Psalm 119 is in praise of the Law, and the joys to be found in keeping it. It is not "legalism" but rather a love and desire for the word of God in Israel's Law, which is the expression of the Lord's revelation of himself and his will for humanity.

The psalmist affirms that with the law in our hearts and at the centre of our being, we can be open to wisdom, understanding and goodness all of which are gifts of God. The law can be obeyed only as God's presence enables the worshipper to hold fast to God's will. Man obeys the law, not as a duty, but because it is true, and indeed is truth itself.

The motto of St. Thomas University speaks to the teaching that is designed to give the student that culture of the mind, will and emotions necessary to be disposed to achieve excellence in ones personal and social life within the framework of the particular calling, the exercise for which is undertaken in the St. Thomas community.