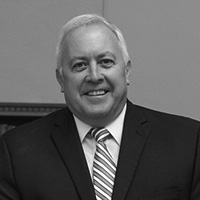 Fredericton lawyer and former MLA Greg Byrne, QC, BA’84, has been selected as the recipient of the 2017 STU Alumni Association Award for Service.

"Greg Byrne has done St. Thomas proud with his achievements. He exemplifies the spirit of the university and the philosophy of giving back," wrote his nominator.

"Greg has been heard to say many times that he credits his time at St. Thomas with giving him the base upon which to build a career in service to the people of New Brunswick. He is a great example of the type of community-minded citizen for which St. Thomas is renowned, and which is so critical to the health and well-being of our province, our city, and our graduates."

Byrne received a Bachelor of Arts degree from St. Thomas University in 1984 and a Bachelor of Laws degree from the University of New Brunswick in 1987. He joined the law firm Whitehead, Bird, Miles & Byrne as a partner. He later served two terms as a Member of the Legislative Assembly, where he held ministerial roles including Minister of Justice and Attorney General, Minister of Finance, and Government House Leader. He is now the Principal Secretary in the Premier of New Brunswick’s office.

Community-minded, Byrne has always found time to give back to his community. He has sat on many boards of directors, including the Canadian Nurses Association, Youth in Transition Fredericton Inc., and the Irish Canadian Cultural Association of New Brunswick, among others. He served as president of STU’s Alumni Association and sat on the university’s Board of Directors.