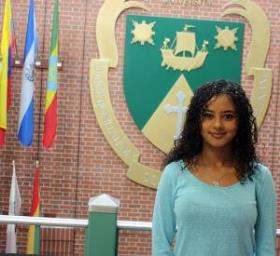 When Ruth Hadgu saw news of the bombings in Syria in mid-February, she felt compelled to help.

Unsure about what she could do from Fredericton, she decided the greatest impact would come through monetary donations to the Preemptive Love Coalition—an organization working to provide relief efforts and job creation for refugees.

“I feel like sharing a post or signing a petition isn’t really making a difference anymore,” Hadgu said. “I know for sure that a few dollars make a huge impact. Hospitals in Syria are underfunded and people who are hurt die because they can’t receive the care they need.”

Hadgu, a first-year student from Ethiopia, was given permission to speak to students in her classes about the situation in Syria, showed a video following a Human Rights Centre event on campus, and used her birthday as an opportunity to fundraise.

“My birthday was the following Sunday and my friends and I had planned a dinner,” Hadgu said. “I texted them and asked that instead of paying for dinner they give me a donation. I just wanted to raise whatever I could.”

In a few short weeks, Hadgu was able to raise $200. She intends to continue fundraising and is hoping to collect $300 before sending the money to the Preemptive Love Coalition.

“A dollar from here can make a huge difference there—five dollars can buy an emergency kit to help families,” Hadgu said. “I’d like to make this an annual thing and raise funds through events each year.”

If you’d like to donate, please reach out to Ruth Hadgu directly at hmqbr@stu.ca.

“STU is my type of university”

Hadgu, who intends to honour in Economics, major in Psychology, and minor in Math and Human Rights, was drawn to St. Thomas for its focus on social justice and human rights.

“STU is my type of university,” she said. “It’s exceeded my expectations.”

Hadgu would like to follow in the footsteps of her father, who works as a humanitarian for the United Nations. She said her work raising awareness and funds for the situation in Syria is just the start.

“This is the type of thing I want to do,” she said. “I want to eventually earn a law degree and work for the United Nations.”