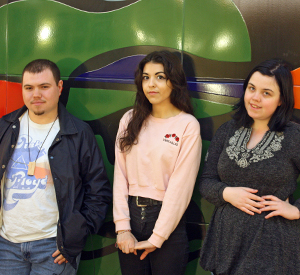 The three students are this year’s recipients of the prizes in creative writing at St. Thomas University—Mersereau earned the David Adams Richards Prize for Prose, Nason was awarded the Casto Prize for Poetry, and McCormack received the Velensky Prize for All Genres.

Mersereau, a fourth-year student from Fredericton, NB, wrote about his experience with clinical depression in “I Shall Be Elsewhere.” The English Language and Literature major wanted to write something different that spoke to what his mental illness felt like.

“My mom sent me an article compiling several artists’ renditions of what their mental illnesses felt like, and I didn’t see anything that resonated with my experiences,” he said.

“My depression is a symbol of agency, the junky, reliable car that should take you everywhere you want to go.  But instead you never turn off the highway, and just keep plowing along until the car stops. When it does stop, it brings you to a nice old house that just needs a little tidying up outside, but then you go in.  At some point you wake up and you’re back in the car, driving along like nothing happened, but you bear the unsettling feeling that something is wrong.”

The adjudicators were impressed with the originality of Mersereau’s piece and called it an “ambitious second-person narrative.” He said winning the award this year is the perfect bookend to his studies in Creative Writing.

“It does feel affirming to win this year,” he said. “It feels good to be finishing my creative writing studies on such a high note.”

Nason, a third-year student from Wirral, NB, submitted a poem titled “hiraeth.” The adjudicators believed this was a perfect representation of their work as hiraeth is a Welsh word for the feeling of nostalgia for a place that’s not familiar to you—a sentiment evoked by their poem.

“I have a complicated relationship with memories of my childhood, in particular the idea of home,” Nason said. “With my poem I was trying to reconcile the longing I have for certain memories I’ve never experienced and have had to create from scratch.”

For Nason, earning this recognition was both “shocking and wonderful.”

“The happiest thing for me is the contentment I’m feeling over the knowledge that a group of people genuinely enjoyed my creative work.”

Velensky Prize for All Genres

McCormack, a fourth-year student from Woodstock, NB, submitted two poems and a prose excerpt that earned her the Velensky Prize.

“’Rose Gold’ was a piece I wrote during my time abroad and is inspired by the concept of human connection and meaning-making,” she said.

“’Pov’ was inspired by my mother and what we inherit from the trauma of domestic abuse and violence, and the prose excerpt along with its accompanying poem ‘Dumpster Kitten’ is a scene of this domestic violence creatively explored.”

The adjudicators were captivated by McCormack’s economy of language, vivid images, and unique constructions.

The soon to be graduate was the recipient of the Castro Prize for Poetry last year, and said the greatest part of winning this prize is knowing someone has connected with what she’s written.

“It means there’s a community that finds solace and solidarity in creative writing.”