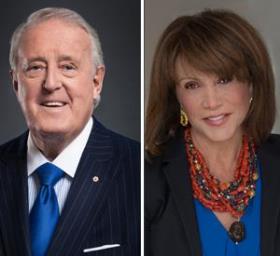 St. Thomas University will be recognizing former Canadian prime minister the Rt. Hon. Brian Mulroney and his wife Mila Mulroney with honorary degrees at its Spring Convocation on Tuesday, May 15 at 2 pm.

“Brian Mulroney, an alumnus of St. Thomas College in Chatham, was Canada’s eighteenth prime minister and has a noteworthy record of economic, environmental, and international accomplishments, while Mrs. Mulroney played an important role during her husband’s time in office and has been a prominent and effective leader of charitable causes for over three decades,” said Dawn Russell, St. Thomas University’s president and vice-chancellor.

Following his time at St. Thomas College, Mr. Mulroney graduated from St. Francis Xavier University and Université Laval. He practised law in Montreal and was president of the Iron Ore Company of Canada before becoming leader of the Progressive Conservative Party. In 1984, he led the Conservatives to the largest election victory in Canadian history and was re-elected with a majority government four years later becoming the first prime minister in 35 years to win successive majority governments. His government introduced the Canada-U.S. Free Trade Agreement, the North American Free Trade Agreement, and the Canada-U.S. Acid Rain Treaty. Mr. Mulroney also served as co-chair of the United Nations World Summit for Children and his government played a leading role in the campaign against apartheid in South Africa and the creation of Le Sommet de la Francophonie. He is a Companion of the Order of Canada and a Grand Officer of the Ordre National du Québec, and for his leadership in matters affecting their nations, he has received the highest civilian recognition from Haiti, the Ukraine, Japan, South Africa, and France.

At an early age, Mila Mulroney emigrated with her family to Canada from Sarajevo in the former Yugoslavia. She later studied engineering at Concordia. She attended to a full agenda of official functions in Canada and abroad during the years of her husband’s government. She also represented Canada at international forums and played a leadership role in many charitable and educational endeavours. She served as National Chair of the Cystic Fibrosis Foundation of Canada for almost a decade, raising millions of dollars for research into this genetic killer of children while spending countless hours visiting, encouraging, and consoling the victims and their parents. Mrs. Mulroney has also focused on literacy projects, particularly with Frontier College. She was co-chair of Table of Hope for fifteen years, a leading Montreal charity that provides meals to schools in less affluent neighbourhoods. She has served as a Board Member of the Foundation of The Toronto Hospital for Sick Children, Les Grands Ballets Canadiens, and the McGill University School of Music.