Giving a Voice to Important Issues 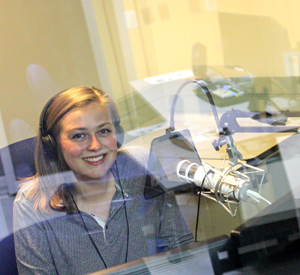 Gould, of Moncton, NB, is in her fourth year of Journalism at St. Thomas and is looking to put the skills she’s earned in reporting, broadcasting, and radio to work.

“Working at the CBC is going to help me build confidence in the skills I’ve gained at STU,” she said. “I’m looking forward to working with established journalists and being able to give a voice to people who might not have the courage to speak up.”

Gould begins work with the CBC in mid-May, and while she’s willing to produce content in all forms she’s hopeful she will get the opportunity to work in radio.

“I love working in radio. I’ve been told I have a ‘radio voice,’ but I also like the fact it’s all about what you’re putting on the air,” she said. “Anything to do with sound is up my alley. Radio is definitely my strong suit and I learned that at STU.”

On top of her technical skills, Gould believes her ability to approach issues with an open mind will benefit her as a journalist.

“The way of thinking I’ve developed here is what I’ll bring to the CBC. Looking into issues in different ways and from different perspectives is hard to do, but I feel like I’ve been taught how to do that,” she said.

Gould came to St. Thomas after completing a summer job with the City of Moncton where she worked closely with the Communications Department. After taking courses in Journalism and Communications, Gould said she found her niche.

The highlight of her time in the program was the senior seminar with Professor Philip Lee.

“We did a year-long project on Indigenous peoples, the Jemseg Crossing, and what’s going on with Sisson Mines, and I’ve learned so much from that,” she said. “There’s so much to be taught and there’s so much to be learned on these issues. It was a really awesome project.”

The opportunity to work closely with professors—many of whom are currently working in the field—had an impact on Gould’s experience.

“I’m very thankful for all my professors, but especially my Journalism profs,” she said. “The professors make the program; we’re really lucky here. They have awesome people teaching and that’s made a world of difference.”