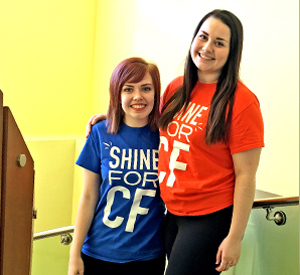 Thanks in large part to the work of recent campaign leaders Emily DesRoches and Victoria Da Silva, St. Thomas has been recognized as one of Shinerama Canada’s most improved campaigns.

A much anticipated Welcome Week event, Shine Day takes place days after first-year students arrive on campus for the first time. New and returning students hit the streets of Fredericton to flip burgers, sing, and wash cars in effort to raise awareness and money for Shinerama, Canada’s largest post-secondary fundraiser in support of Cystic Fibrosis Canada.

DesRoches and Da Silva have devoted much of their four years at STU to the campaign.

DesRoches, originally from Hampton, NB, led STU’s campaign in 2016, before passing the baton to Da Silva, from Dartmouth, NS, in 2017. Both have been involved since their own Welcome Week.

Together, they attended the 2017 National Shinerama Conference, where they learned more about cystic fibrosis and were trained on running a successful campaign.

“We learned so much at the conference,” DesRoches said. “We wanted to do anything we could to help.”

DesRoches and Da Silva have since both earned new titles with Shinerama Canada.

DesRoches, who recently completed her double major in English and Communications and Public Policy, was named one of two Atlantic regional directors for Shinerama.

She said hearing personal stories from individuals living with cystic fibrosis motivates her to keep working with the organization.

Da Silva, who has finished her degree with a double major in Gerontology and Psychology, became one of five campaign advisors for the Atlantic provinces. She said education is key to a successful campaign.

“We spent a lot of time informing the students so they are knowledgeable when they’re asked about cystic fibrosis. We also talk to Welcome Week leaders about it, and share stories of the people we met at the national conference who live with cystic fibrosis. It makes it more personal. You could tell a lot of people were really touched and it helped their first-years understand the importance of the campaign.”

Learning more about the disease and talking with individuals who live with it has been life-changing for both DesRoches and Da Silva.

“We take breathing for granted,” Da Silva said. “I try to put myself in the shoes of someone living with this and try to imagine what life would be like. The amount of time they spend in physical therapy is equivalent to a part-time job. The fact that they can’t be in the same room as anyone who actually understands what it’s like to live with the same challenges is heartbreaking.”

Although both DesRoches and Da Silva graduate in May 2018, they know the STU campaign is in good shape to maintain momentum.

“We’re really excited to see where the campaign goes next,” DesRoches said.

About Shinerama Canada
Since 1964, Shinerama has raised approximately $27 million dollars for life-saving cystic fibrosis research and care. Cystic fibrosis is the most common fatal genetic disease affecting Canadian children and young adults, and there is no cure. It mainly affects the digestive system and lungs. The degree of cystic fibrosis involvement differs from person to person. However, the persistence and ongoing infection in the lungs, with destruction of lungs and loss of lung function, eventually causes death in the majority of people who have cystic fibrosis.

It is estimated that one in every 3,600 children born in Canada has cystic fibrosis. Over 4,200 Canadian children, adolescents, and adults with cystic fibrosis attend specialized clinics.