Alexandre Silberman Connects with his Roots on International Exchange in France 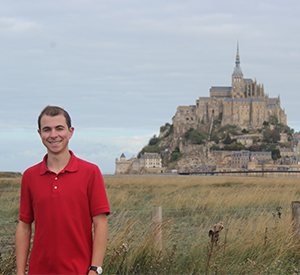 Spending a semester on international exchange in Angers, France presented an opportunity for Alexandre Silberman to connect with his roots.

“The French language is an important part of my identity,” he said. “Much of my family is francophone, so I’ve been exposed to French at home and through relatives since I was young.”

The city of Angers has a large student population and is home to many museums, art galleries, and events, making it an ideal location for Alexandre to immerse himself in the French culture.

“The highlight of my exchange has been my experience interacting with the French people. They have been warm, welcoming, and appreciative of the opportunity to meet someone from a different country,” he said.

“I’ve had so many conversations, and from my experience I’ve realized how much the language brings people together.”

The third-year STUdent from Burlington, Vermont, also saw the academic benefits of spending a semester abroad—his time in France will improve his French writing and communication skills, which he plans to use in his future career in journalism.

“The classes are small and it’s interesting to learn about global and French politics from a European perspective,” he said. “My classes meet a few times a month for several hours at a time, so it was an adjustment to adapt to that system. Adjusting to studying and writing completely in French has been a new challenge as well.”

Alexandre has tried to see as much of France as possible between his classes. He’s travelled to Mont-Saint-Michel, Paris, Nantes, Rennes, Saint-Malo, and Dijon, and spent his fall break in the south of France in Montpellier, Marseille, Nice, and Cannes. He’s also taken larger trips to London and Switzerland.

He said his time on exchange has been one of the most memorable parts of his STUdent experience.

“I’m thankful that STU has offered me this experience as part of my degree. The memories I’m making on exchange will last a lifetime.”