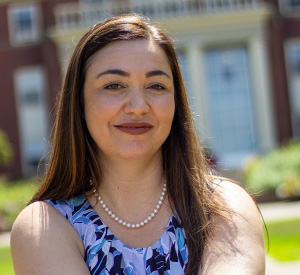 Human Rights Professor Dr. Amanda DiPaolo has been awarded the Association of Atlantic Universities Distinguished Teaching Award – an honour which recognizes outstanding teaching over a number of years.

DiPaolo is the fifth STU professor to receive this prestigious award from the association, which represents the 16 universities in Atlantic Canada.

"The culture at STU is one where students can feel like they matter,” she said. “When I was a student at St. Thomas University, I always felt like I mattered to my professors because they put so much effort into providing me with a quality education. That is now what I am trying to do for our students today.”

DiPaolo earned a BA from St. Thomas University and an MA and PhD at Syracuse University. Since coming to St. Thomas in 2014, she has become known for her innovation and commitment to the highest standards of teaching and has received outstanding evaluations from her students. In the classroom, she is able to engage even the most reticent students and uses her knowledge of international legal systems, politics, and human rights to create a broad and versatile learning environment.

DiPaolo has helped to expand the Human Rights Program from eight courses to 24 and to establish a new honours program in Human Rights.  She teaches courses on the Charter of Rights and Freedoms and Philosophy of Human Rights, and conducts independent studies on issues ranging from constitutional law to the Holocaust.  She was awarded St. Thomas University’s highest teaching honour, the John McKendy Memorial Teaching Award, in 2017.

“Dr. DiPaolo is a professor with the conviction that teaching and learning require growth, dedication, sacrifice, and engagement,” said President Dawn Russell. “Everything Dr. DiPaolo does shows care for the students’ intellectual stimulation, high expectations, and devotion to developing their abilities.”

Perhaps the most vivid example of Dr. DiPaolo’s commitment to her students, her active training of their skills, and her support of their intellectual development, is her creation and leadership of the Moot Court program.  STU’s Moot Court team increases in size every year, a testament not only to the persuasiveness of the results, but to the students’ desire to be challenged.

STU was the first Canadian university among 400 undergraduate teams competing across the United States. Among these schools, STU is ranked first for legal writing and third for advocacy. A few months back, two STU students were crowned Canadian National Moot Court Champions at the Osgoode Cup. And over the past three summers, STU students have won and finished second in the Nelson Mandela World Human Rights Moot Court Competition. In three international competitions, five STU students have earned speaking awards putting them in to top ten out of 100 participants.

“The experience of Moot Court changes students’ lives and gives them the skills and the confidence to succeed in whatever career path they choose to follow. And this is all thanks to Dr. DiPaolo’s outstanding teaching,” said President Russell.