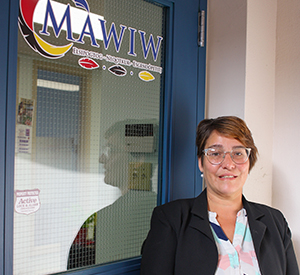 Nicole Augustine has been recognized for her work supporting Indigenous children by the First Nations Child and Family Caring Society.

Augustine, a third-year student in the Mi’kmaq Maliseet Bachelor of Social Work (MMBSW) program, was one of three recipients of the Jordan’s Principle Scholarship. The national award is given annually to individuals who have made contributions to ensure best outcomes for First Nations, Metis, and Inuit children and young people.

“As an Indigenous student it’s hard to balance school with other responsibilities. I’ve been going to school for a long time with minimal support as a single mother, so for me to have that acknowledgement and to be associated with the Caring Society—I don’t even know how to explain it. It’s amazing,” Augustine said.

Augustine has been working for Jordan’s Principle—which ensures First Nations children can access all public services when they need them—as a services coordinator but began there as an intern through the MMBSW program.

“I never expected to be able to do an internship with Jordan’s Principle and to be able to use what I know in order to benefit children while I’m still a student,” she said.

“I was able to develop a holistic framework that they’re looking to go national with. It represents the medicine wheel and we use it as an intake assessment tool which makes it different than any other program because we’re looking at substantiated equality. This means there’s an understanding that when we request services not all children start from the same position.”

For Augustine, who also completed her undergraduate degree at St. Thomas in 2009, working with Jordan’s Principle has been especially gratifying because her role model, Cindy Blackstock, has supported the work at the Human Rights Tribunal.

“It’s been a real honour to work in that field and in that department,” she said. “It has really opened a lot of doors.”

After completing the MMBSW degree, Augustine plans to enroll in an Indigenous master’s program in Social Work. Her ultimate goal is to work under Cindy Blackstock and advocate for Indigenous children at the Human Rights Tribunal.