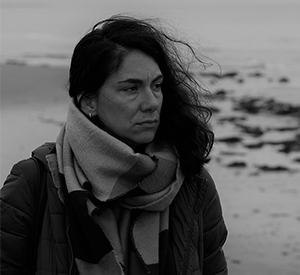 The film, which she co-directed with Ioan Cocan, was awarded the Best Feature Documentary prize at the Santorini Film Festival in Greece this summer.

Media coverage of the 2015 European refugee crisis showed the issue through an individualizing gaze placed on the refugee subject. Images of crowded tents, boats overflowing with people, children dying on Mediterranean shores, to name a few media examples, have sensationalized the experience of suffering refugees. The crisis was witnessed as a distant spectacle that seemed to end almost as suddenly as it began.

Trace turns the gaze outwards, scrutinizing the “space” of the crisis in which people seek refuge.

“Our film aimed to reverse and challenge this gaze, by using imagery that structurally maps the symbolic landscape of the refugee crisis and juxtaposing it to narrative accounts shared by those involved in the crisis – in detailing issues related to asylum, resettlement and deportation faced by service providers and the refugees themselves,” Bejan says.

Trace starts from the presumption that the ‘problem’ of the refugee crisis is structural in nature (i.e., determined by global political conflicts, north-south inequality patterns, etc.), hence the conceptual focus when engaging with refugee issues needs to be directed away from an individualizing scrutiny on the matter and away from the dehumanizing process that transforms the migrant subject into an object commoditized for visual public consumption.

“We are in the moment of the post-refugee crisis in Europe. The influx of migrant boats diminished significantly after 2016, once the EU signed the forced returns agreement with Turkey. The ‘presence’ of the refugees is no longer a sine qua non presence and the space of the island symbolically changed from accommodating refugees’ presence to hosting their absence.”

Because film appeals to a viewer’s emotions, Bejan says it’s an engaging way to expose an audience to social issues.

“Visual footage has the ability to engage the viewer not only conceptually (as a research paper or an opinion/editorial piece will do) but also emotionally,” she said. “Feeling rather than thinking about something can have a much greater effect in terms of consciousness building and political engagement. More so, visual storytelling can constitute a strong approach to mobilize narratives concerning vulnerable populations.”

Trace will be screened as part of a collaborative exhibit jointly curated by the University of New Brunswick (UNB) Art Centre and the Beaverbrook Art Gallery (BAG) and displayed in Fredericton, NB between January 10th and February 14th 2020 as well as at the ARTHUB, Bucharest, Romania in the Spring of 2020. It will additionally be included in the Cinema Politica Fredericton’s Winter Program, which runs from January to April 2020.