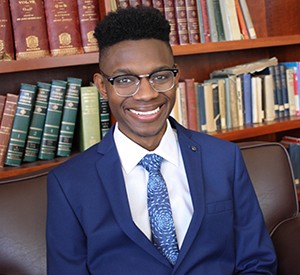 A leader whose impact was felt on and off campus is the recipient of the top student award at St. Thomas University.

Husoni Raymond, from Kingston, Jamaica, has been named the 2020 recipient of the Tom McCann Memorial Trophy. The trophy is presented annually to a senior student who possesses strong leadership, character and personality traits and best portrays the spirit of the university through their contributions.

"Husoni embodies the spirit and substance of the Tom McCann award. He was selfless in giving back to the campus community—in official positions and as a volunteer—and over four years he became a distinguished scholar and leader. As much as he has poured his time and energy into important causes, he has done the same for those classmates around him. His impact on our campus will resonate long after he graduates," said Dawn Russell, President and Vice-Chancellor.

During his four years as a student, Raymond’s contributions have been extensive. He was involved in the Students’ Union, as a member of Harrington Hall House Committee and then as Vice-President Administration, before becoming the first Black student to be elected STUSU President. He worked as an intern with the Career Development Office, re-launched the STU Debate Society, and has been an award-winning member of the STU Moot Court team. He also served as the Vice-Chair of the New Brunswick Student Alliance.

“I am grateful to have been nominated and selected as this year's recipient of the Tom McCann award. The students, faculty, and staff inspire me to do my best each day. Being surrounded by smart, passionate, and socially engaged individuals has motivated me to do my part in enhancing the social and academic experience here at STU—I would like to dedicate this award to them,” said Raymond.

One of his most meaningful contributions to the St. Thomas community was the institution of the now annual Black History Month celebration. After noting a lack of programming in his first year, Raymond raised funds and organized a series of events including a panel with prominent activists, a poetry night, film and documentary screenings, and social media and poster education campaigns.

“The Black History Month events paved the way for clubs like the Black Students’ Association to be formed and embrace Black culture on campus,” wrote a nominator. “Husoni’s leadership, personality, and involvement has encouraged international students to push their boundaries and be leaders in their own way.”

Raymond has also been a very active volunteer on campus. He was a student representative on the Senate and Board of Governors, lead organizer for the ‘Get Out The Vote’ campaign, Caribbean Ambassador for the International Students’ Association, and an Off-Campus Engagement Committee member.

Despite a full schedule, he has always made time for his peers. “No matter how hectic his schedule, he would never pass up an opportunity to stop and talk to any student,” another nominator wrote.  “Husoni cares about how people are making out and would put his own schedule on hold if he felt there was a way he could help another student.”

He has also been an advocate on and off campus. One nominator was struck by his approach to advocacy: “He builds positive, respectful, and collaborative relationships with administrations, government officials, and students. He approaches issues with integrity, honesty, and an even-handedness that encourages others.”

Raymond has excelled academically. He is studying Criminology and Criminal Justice and Communications and Public Policy, and has been a Dean’s List scholar for the past three years.

“I am a different person now than I was four years ago when I started my degree,” said Raymond.

“The interactions and experiences I've had at STU have emphasized the value of passionate advocacy, service to others, and the importance of kindness and empathy in a world where forces seek to divide us.  We must all continue to embody the values of the Tom McCann as we work together to positively impact our communities and the world at large.”