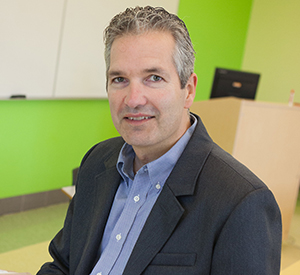 History professor Dr. Carey Watt has received the Wallace and Margaret McCain Course Release Award. Watt plans to use the course release in the 2021-22 academic year to work on his book, The “Perfect Man” in Colonial India & Afro-Asia: Strongman Eugen Sandow’s World Tour of 1904-05 and Its Legacy.

The Wallace and Margaret McCain Course Release Award was created in 1997 after the McCain family made a generous donation to St. Thomas University to pay for a three credit-hour course release in support of faculty research.

Watt has been researching London-based bodybuilding, physical culture pioneer, and fitness entrepreneur Eugen Sandow (1867-1925) for several years and has published many articles and book chapters that touch on him directly or indirectly.

This year, as he finished two more pieces that relate to Sandow’s 1904-05 world tour of Africa and Asia, he decided it was time to write a book on it.

“No one’s studied it in any depth, probably because the tour crossed oceans, continents and hemispheres and it takes a lot of legwork to track down the right information,” Watt said.

Sandow was known around the world in 1900 as the world’s strongest man and the “perfect man”: the epitome of white European masculinity.

“It seemed important to write about what this “perfect man” did and how he was received while touring the world at the peak of European imperialism, especially when the British justified ruling over hundreds of millions of non-white colonial subjects by portraying them as inferior in terms of race and manliness,” he said.

Watt added that the study can also teach us about globalization in 1905. Sandow travelled by steamship and trains and used telegraphic communications extensively, but the tour wasn’t trouble-free.

"So the world tour can teach us about the world of colonial entertainment and touring shows. Sandow was an entertainer who performed on vaudeville and music hall stages – and he also ran his own circus for a while in 1905. He and his team were constantly improvising and adapting to political, personnel and logistical opportunities or challenges.”